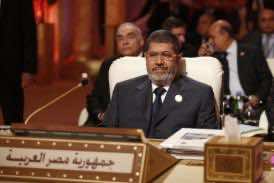 Egypt’s President Mohamed Morsi and the military have closed ranks to deny charges that soldiers had killed and tortured protesters, following leaks of an inquiry report implicating officers.

Defence Minister Abdel Fattah al-Sissi, who is also army chief, denied in a televised statement aired Friday that the military had committed abuses, after talks with Morsi, who named the fact-finding inquiry last year.

“I swear, by God, the armed forces did not kill nor order killings; it did not act treacherously, nor did it order treachery,” said Sissi, standing next to Morsi.

Morsi in turn praised the armed forces for “protecting Egypt when it started its march on January 25,” referring to the 2011 uprising that overthrew president Hosni Mubarak and ushered in interim military rule.

The Egyptian press and Britain’s Guardian newspaper have published leaks from the report by the fact-finding panel, named shortly after Morsi took office in June, implicating the military in killings, torture and disappearances.

According to a Guardian report, the inquiry found that army officers ordered doctors to treat wounded demonstrators without anaesthesia after they clashed with soldiers during protests against military rule in 2012.

The inquiry also reportedly documented cases of soldiers committing killings and torture during the 18-day uprising that overthrew Mubarak in early 2011, after he had deployed the military to try to quash the unrest.

In early January, the committee submitted its report to Morsi, who referred it to a “revolutionary prosecution” he created to investigate crimes during the revolt and under military rule.

It was not immediately clear whether the leaked sections were from drafts or the final report.

The US State Department urged Morsi to release the report, which he had ordered at a time of tensions with the military in 2012.

“For the sake of transparency, we do believe it should be made public, and we urge the government of Egypt to credibly and independently investigate all claims of violence and wrongdoing and promptly bring the perpetrators to justice,” said deputy spokesman Patrick Ventrell.

He stressed that US officials have not yet seen the report.

The New York-based lobby group Human Rights Watch stressed that “releasing the fact-finding report would be the Egyptian government’s first acknowledgment of two years’ worth of police and military abuses.”

Despite reports in January that the inquiry would be published shortly, the document has been shrouded in secrecy, prompting some to accuse the government of suppressing the findings.

A presidential aide told AFP that the report detailed “16 new incidents, which have been assigned to 16 prosecutors to investigate.”

The presidency’s responsibility over the inquiry ended when he referred the findings to the prosecution.

“The presidency created the committee and assisted its work, but now it’s in the prosecution’s hands,” the aide added.

On Thursday, Morsi promoted three army commanders in a show of support for the military during the meeting with the Supreme Council of the Armed Forces, which took charge after Mubarak’s overthrow and before Morsi’s election.

“I declare this to the entire world, I greatly appreciate the role of the military,” said Morsi, flanked by generals, in the televised statement after the meeting.

Egypt’s first civilian leader sacked Tantawi after an August militant attack killed 16 soldiers at a border post, seizing on discontent within the military to purge commanders whose loyalties were in doubt, an aide said at the time.