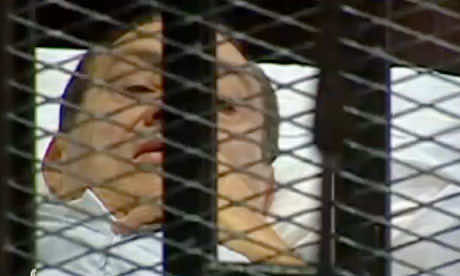 The judge in the retrial of Egypt’s Hosni Mubarak recused himself on Saturday, in a chaotic opening hearing that lasted just seconds and saw a proud and combative Mubarak smile and wave in the dock.

Judge Mostafa Hassan Abdallah told the court he would send the case to the Court of Appeal, which will then refer the trial to a new circuit, sending the fate of the ousted strongman back to square one.

As the judge filed out of the courtroom, uproar erupted with people shouting and waving their arms. Civil society lawyers attending the trial chanted: “The people want the execution of the president.”

In October, the same judge had acquitted the defendants in the infamous “Battle of the Camels” trial, who were accused of sending men on camels and horses to break up a protest during the 2011 uprising that toppled Mubarak.

Mubarak, his former interior minister Habib al-Adly and six security chiefs were again in the dock — albeit briefly — for their alleged complicity in the murder and attempted murder of hundreds of peaceful protesters on January 25-31, 2011.

“This judge and this circuit acquitted all the defendants in the battle of the camels and there is a lot of doubt over their position. This prevents him from conducting this trial,” said Amir Salem, a lawyer for the victims of families.

Months of rumours that Mubarak was in a coma or too weak to attend his retrial were put to rest on Saturday as the former leader seemed healthy and strong as he sat in the defendants’ cage, smiling and waving to supporters.

His sons Alaa and Gamal, who are also facing a new trial for corruption, also appeared to be in good spirits as they smiled and chatted to their father.

Earlier on Saturday, television footage showed Mubarak wheeled out of an ambulance on a stretcher and taken into the capital’s Police Academy in a Cairo suburb for the hearing.

A handful of supporters outside the courthouse held up posters of their former leader, but were outnumbered by security personnel.

Mubarak was flown to the academy that was once named after him by helicopter from the Cairo military hospital where he is being treated, the official MENA news agency said. He left the compound the same way.

His original trial in August 2011 was a major moment for both Egypt and the region, being the first time an Arab leader deposed by his people had appeared in court in person.

Gamal and Alaa Mubarak, once symbols of Egyptian power and wealth, also faced retrial on corruption charges. Another defendant, business tycoon Hussein Salem, was to be tried in absentia.

Mubarak, who turns 85 in May, has suffered several health scares and MENA even reported him clinically dead at one point as he slipped into a coma.

In January, Egypt’s highest court, the Court of Cassation, ordered a retrial for Mubarak after accepting an appeal against his life sentence, citing procedural failings.

Legal experts said the original case verged on the farcical, with patchwork evidence and prosecution witnesses exonerating the defendants.

Adly had also been sentenced to life for involvement in the deaths of protesters, but controversially his security chiefs were acquitted, sparking widespread anger and protests after last June’s verdict.

Until Saturday’s courtroom turmoil, the fate of the ousted strongman has been largely eclipsed by deadly violence and economic woes currently gripping Egypt, however.

Morsi’s presidency has been plagued by unrest and deadly clashes between protesters and police, a revolt in the canal cities, sectarian violence and a devastating economic crisis.

“The country is largely unlikely to pay attention to the trial,” said H.A. Hellyer, a non-resident fellow at the Brookings Institution, ahead of Saturday’s hearing.

“There is the potential that the ruling party use the trial to deflect attention from the problems they are facing,” he told AFP.

Despite the fact that what happens to Mubarak had seemed of little relevance to many, there is still widespread anger over no one being held accountable for nearly 900 deaths during the 18-day uprising in 2011.

Mubarak’s epic fall, from dictatorial head of the Arab world’s most populous nation to a defendant behind bars, was for many a promising sign the revolution which toppled him was on the right track.