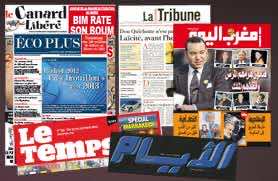 The latest report of the UN Secretary General on the Sahara issue and the government’s decision to cut 15 billion dirhams from the 2013 investment budget are the main topics discussed by the editorials of Moroccan weeklies.

Under the title “separatism and jihadism, two sources of destabilization”, “La Nouvelle Tribune” writes that the latest report of the UN Secretary General “highlights both the efforts made by Morocco to promote sustainable development in the southern provinces and its compliance with the international legality, and the progress made by the Kingdom in terms of human development and respect for human rights in the southern provinces,” adding that the report” however, differs fundamentally from the previous reports as this one expresses genuine concern about the future of the region, due to the risks of violence, armed conflict and destabilization spillover from northern Mali and the Sahel.

Under the title “Benkirane caught in the crossfire,” “Le Temps” argues that “Abdelilah Benkirane is stuck in a very sticky situation after the violent backlash following the government decision to cut the investments budget,” noting that it is quite rare to see such a division among politicians, let alone the components of a single majority. “

For its part, “Le Canard libéré” says that Benkirane has taken the easy road to address the budget deficit, by opting for the decision to cut the 15-billion dirham investment budget, a decision which will seriously undermine the strength of his government coalition.”

Under the title “Austerity the Moroccan way,” “Finances News Hebdo” wonders whether the government’s latest austerity move is a “shortcut that will prove detrimental to the national economy or a wise choice,” noting that “this decision is rather controversial, especially since it has sparked burning questions on the projects concerned, and the criteria to determine which projects to be under-funded.

“L’Observateur du Maroc,” with the title “Act now” highlights a “real crisis of an essential institution, namely the government,” adding that “the majority is more than a decoy, adding that the parties allied with the Islamists openly criticize the policies taken by the government and even offer alternatives.”

For its part, “Le Reporter” emphasizes that “such a decision is never good news, as less funds mean less future predictability, less activity for the economy, fewer jobs and less income, “noting that this is the reason why companies (especially those who depend on public investment) and trade unions have immediately voiced their concern.