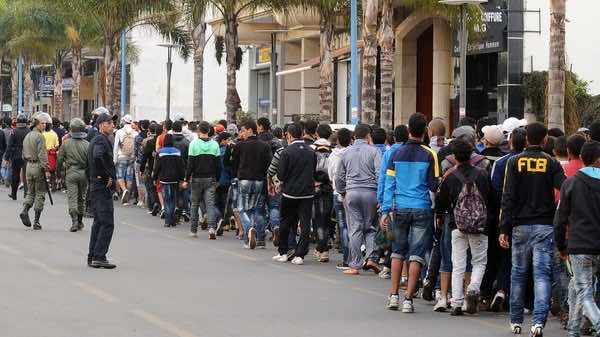 In the absence of any precautionary security measures prior to the soccer match between Rabat’s FAR against Casablanca’s RAJA on Thursday, almost all the streets adjacent to the stadium witnessed an unprecedented cloud of vandalism.

Destruction and terror swept those streets as an innumerable wave of hooligans representing either both or one of the teams, engaged in monstrous acts of demolition and robbery of private and public properties by means of violence and threat.

Before the sight of helpless Moroccan passersby, a number of cars were partially or entirely damaged by a horde of enraged individuals. Shops were obtruded and robbed and the lives of a large number of people, ranging from adult men and women to children, were placed in jeopardy amidst such trigger-happy acts.

In a video posted on Youtube on the aftermath of those acts, a handful of witnesses and victims expressed their shock at what happened.

“People, young and adult, were beaten at that terrifying moment,” testified a woman in the video. “I even saw a woman’s child being thrust off his carriage as his mother was in turn shoved callously by a fierce wave of individuals,” she added.

Unexplainably, the security officials who had claimed to have everything under control prior to those vandalistic acts surprisingly vanished by the time these acts of vandalisms erupted. “No security official was there to protect us while our lives were put in danger by those uncontrollable individuals,” stated the same woman

. “It is the men who were sitting in the coffee at that moment that took the imitative and helped the woman to protect her baby,” she added.

To rationalize their noticeable absence during the acts of vandalism, security officials claimed not having anticipated those flocks of hooligans to take certain passages in the city or to arrive in Casablanca via unpredictable entrances. “Security officials should have anticipated such occurrences and should have been prepared beforehand rather than claiming now that the deluge of individuals erratically surged from nowhere,” another witness stated.

Moroccans are now urgently calling on concerned government officials to take soccer matches and their hooligans more seriously from now on. “I think soccer supporters should no longer pass through these streets,” shared a man from the video.

It is thus axiomatic that the ministry of interior is now expected to amplify its security precautions prior to, during and after such sportive events.

Moroccans from all walks of life denounced these despicable acts of vandalism. Some even question the ‘Moroccaness’ of these dangerous individuals involved in these acts of destruction. Others made proof of sarcasm:

“I am from Rabat, but I am not a supporter of neither RAJA, nor WIDAD nor FAR, and I have never wasted my time watching the national soccer championship,” wrote a commenter on the video.

“I don’t watch it because ignorance is right in every fan of it,” the same person added.

“Security officials have failed to protect the people, and as such they must be held to account,” a resident of Casablanca, who asked to speak on the condition of anonymity, told Morocco World News.

“If the government respects the Moroccan people, it has to take disciplinary measures against the security officials who left shop-keepers and passerby helpless in front of this horde of criminals,” he added.