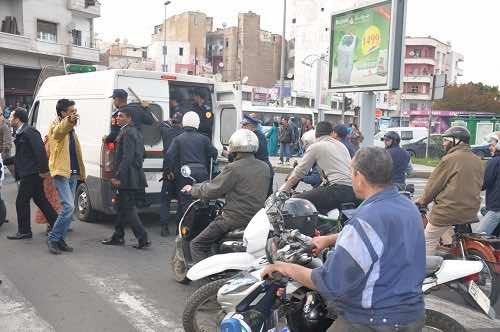 Nobody in Casablanca, not even the authorities could predict that the mobs of the FAR (Royal Armed Forces) will turn into a threatening crowd of rioters capable of the most shocking acts of vandalism, looting and assaulting Casablanca residents.

Hours before the match between the FAR and the RAC known as Raja, huge crowds of overzealous FAR fans stormed Mohammed V Avenue, downtown Casablanca coming from the railway station Casa Voyageurs and heading towards Mohammed V stadium.

Surprisingly the FAR fans were not geared only with flags, puppets and zealous slogans, but they had also knives, swords   and sticks. The rioting broke out early in the afternoon after the FAR fans had left the railway station. In a short span of time, a huge mob of nearly 3000 as announced by eye witnesses started vandalizing shops, breaking cars and assaulting passers-by who had the misfortune to be downtown at that time.

A pending question mark that still haunts many Casablanca residents, where was the police when things started to fly out of handle. Indeed, few police officers formed a chain around the FAR fans to prevent any clash with the adverse team fans but when the wreckage in Mohammed V Avenue started, the police force was totally absent. Whether the police was taken by surprise or it opted not to intervene is still unclear.

It is noteworthy that the FAR fans posted last Wednesday several comments on the FAR facebook account announcing that they had planned to come in a large convoy to support their team.

Sources close to the Moroccan, daily Al Massae reported that  the same unruly behavior was resumed immediately after the game between FAR and RAC ended. But the authorities were more alert and tried to contain their violent behavior.  Indeed, th e police tried to secure transportation for the FAR fans from the stadium to the railway station Oasis.

The minister of interior announced that the vandalism acts resulted in serious damages, including the wreckage of eight tramway wagons, 7 public buses, and 13 cars in addition to 15 shops that were vandalized. During their intervention, the authorities arrested 193 suspects.