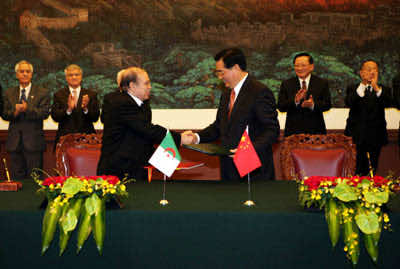 Beijing has invested more than $1.5 billion (1.1 billion euros) over the past decade in Algeria, where 50 top Chinese companies and 30,000 workers are based, media reported on Sunday.

By the end of 2012, China’s total investments in the North African country over the past decade reached $1.5 billion, Beijing’s ambassador to Algiers Liu Yuhe told the daily Liberte.

“More than 30,000 Chinese people work in Algeria in sectors including railway and road construction. They are also helping to develop the water sector,” he said.

Algeria has granted 50 Chinese companies building contracts worth a total of $20 billion, including giving the $1.5-billion contract for a huge mosque in Algiers to the China State Construction Engineering Corporation.

China has rapidly expanded its economic interests in Africa in recent years, and more than one million Chinese workers are based on the continent, according to Beijing figures.

Trade between China and Africa was $200 billion in 2012 — almost double that of the United States with the continent.