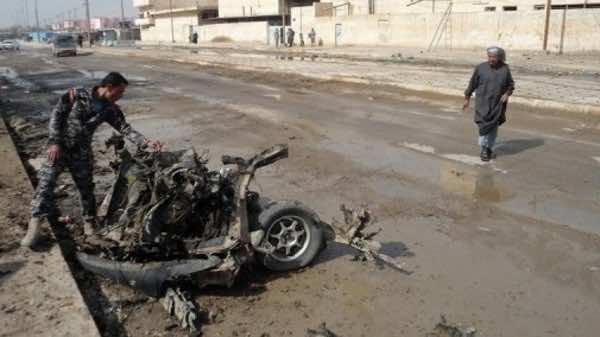 Attacks north of Iraqi capital on Sunday killed at least 10 people, including a provincial elections candidate and six policemen, the latest in an uptick in violence just days ahead of polls.

The credibility of the vote, Iraq’s first since 2010, has been drawn into question as 14 election hopefuls have been murdered and just 12 of the country’s 18 provinces will be taking part.

In restive Diyala province, election candidate Najm al-Harbi was driving in his car along a highway when a bomb exploded, killing him, two of his brothers and a bodyguard, police and a medic said.

An official from Deputy Prime Minister Saleh al-Mutlak’s office confirmed Harbi’s death, and said he was the head of the deputy premier’s list in Diyala province.

Harbi’s killing comes a day after Hatim Mohammed al-Dulaimi, a candidate for Salaheddin provincial council, was shot dead by gunmen near his home in Baiji, north of the Iraqi capital.

Soldiers and policemen cast their ballots for the provincial elections on Saturday, a week ahead of the main vote, the country’s first since March 2010 parliamentary polls.

The election comes amid a spike in unrest and a long-running political crisis between Prime Minister Nuri al-Maliki and several of his erstwhile government partners.

More than 8,000 candidates are standing in the elections, with 378 seats on provincial councils up for grabs. An estimated 16.2 million Iraqis are eligible to vote, among them about 650,000 members of the security forces.

Also on Sunday, five policemen were killed when they attempted to recover the bullet-riddled and booby-trapped body of another cop near the main northern city of Mosul.

As they attempted to lift the corpse of the policeman, who himself had been killed earlier on Sunday, bombs attached to it detonated, killing the five policemen and wounding 14 others, officials said.

Although security has markedly improved since the height of Iraq’s confessional conflict in 2006-2007, 271 people were killed in March, making it the deadliest month since August, according to AFP figures.