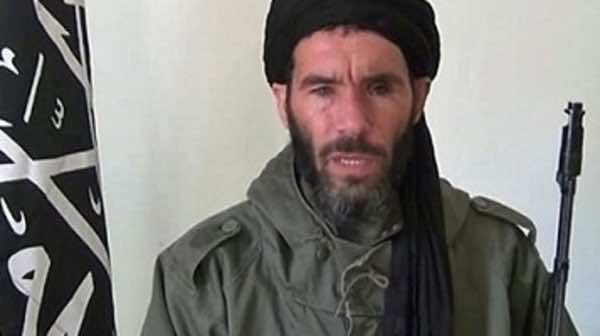 Mokhtar Belmokhtar, a one-eyed Islamist militant leader who Chad claimed was killed in Mali last month, died by setting off explosives in despair over the death of another militant, Chad’s President Idriss Deby said in an interview broadcast on Sunday.

“We have proof of his death. We couldn’t film it because he blew himself up after the death of (Abdelhamid) Abou Zeid. He wasn’t the only one. Three or four other jihadists (also) blew themselves up in despair,” he told French media outlets TV5 Monde, Radio France International and Le Monde in a joint interview recorded in N’Djamena on Saturday.

Belmokhtar, an Algerian Al-Qaeda veteran, was the mastermind of the brazen January assault on an Algerian gas plant that left 37 foreign hostages dead.

In early March, Chad announced that the militant had been killed during fierce fighting in the Ifoghas mountains, on Mali’s northeastern border with Algeria.

But France, which has led the offensive against Islamists in Mali since January 11, has so far only been willing to confirm the death of Abou Zeid, a key commander of Al-Qaeda’s North African branch (AQIM), saying it will carry out DNA tests on killed rebels.

Deby added that he was “perfectly” sure that Belmokhtar was dead. “We identified him,” he said.

Deby also said he believed that seven French hostages taken captive by militants in the region are no longer in Mali. “I personally think that there are French (hostages) alive in the hands of jihadists, but I’m not that sure that that’s in Mali”.

In total, 15 French nationals have been taken hostages in Africa, and on Tuesday AQIM said one of them had died.

The president also said Chad’s troops are now being withdrawn from Mali, with some of them having left already on Saturday.

“The face-to-face war with jihadists is finished. The Chadian army has no real skills to cope with a nebula. Chadian soldiers will return to Chad. They have completed their mission,” he said, but without giving specifics.

Chad has contributed with a contingent of 2,000 soldiers.

Paris pulled out 100 soldiers ahead of schedule on Monday as part of a phased withdrawal of the majority of its 4,000 troops.

France has said it will leave 2,000 soldiers on the ground throughout the summer, reducing its presence by the end of the year to a “support force” of 1,000 fighting alongside a U.N.-mandated army of some 11,000 troops.

Deby said that “if the U.N. makes a request, Chad will provide Chadian soldiers to the U.N..”