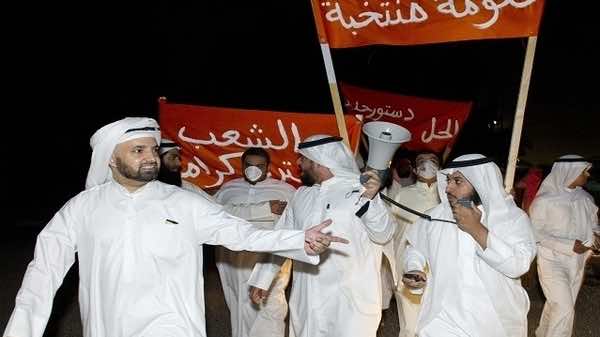 A Kuwaiti court on Monday sentenced main opposition leader and former MP Mussallam al-Barrak to five years in prison after he was convicted of insulting the emir, an AFP correspondent said.

“The court has sentenced the defendant Mussallam al-Barrak to five years in prison with immediate effect,” said judge Wael al-Atiqi.

Barrak was convicted of making statements deemed offensive to the ruler of the oil-rich Gulf state, Sheikh Sabah al-Ahmad al-Sabah, at a public rally on October 15.

He was detained for four days in late October and released on bail. He is also facing trial on several other counts including charges of storming parliament and taking part in protests.

On April 8, his defense team walked out of court after the judge refused requests to hear defense witnesses.

Barrak had asked Atiqi to postpone the trial until he finds a new lawyer but the judge refused and insisted he would issue the verdict on Monday.

Several opposition tweeters and former MPs have been sentenced to jail terms on charges of insulting the emir.

Kuwait’s opposition has been staging protests to demand the dissolution of parliament elected last December on the basis of an electoral law that had been amended by the emir.

The opposition claims that the change is illegal and is aimed at electing a rubber stamp parliament.

In previous prominent cases, sentences have been passed down to social media users on similar charges.

In February, Kuwait’s Supreme Court confirmed a 10-year jail term for an activist convicted of using Twitter to insult the emir and call for the overthrow of the regime.

Orance al-Rasheedi, who was also convicted of spreading false news about Kuwait to undermine the oil-rich country’s image, is final and cannot be challenged.

Rasheedi was accused of using the social networking sites Twitter and YouTube to publicly insult the emir,  Sheikh Sabah al-Ahmad Al-Sabah, who is protected against criticism by Kuwait’s constitution.

Islamist, nationalist and liberal opposition groups, angry over the amended electoral law they said was designed to produce a rubber-stamp assembly, have since been holding almost nightly protests demanding the dissolution of the new parliament.