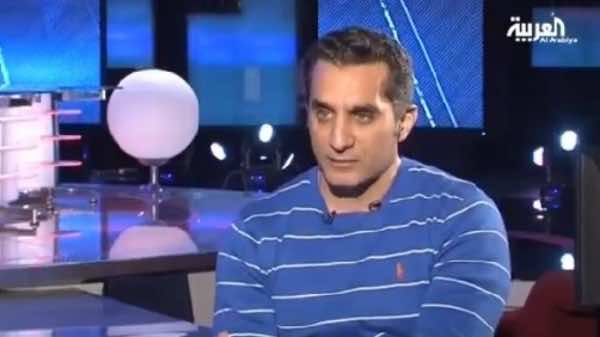 Egypt’s popular political satirist Bassem Youssef denied reports that the Egyptian authorities were behind his decision to stop airing his show for a few weeks.

In an exclusive interview with Al Arabiya, Youssef said he decided to stop the production of “El-Bernameg” (The Show) for a while to give his team a well-deserved break.

“We’ve been working for nine months now… it is a chance for us to get a break… and I will be traveling to America for a reason that I will announce in the next episode,” he said.

On Saturday, the comedian said via the social networking site Twitter: “We will go on a short break for 2-3 weeks, a chance for me to attend a very important international event. Details next episode.”

Youssef confirmed reports that one of his producers “belongs to a family that is affiliated with the Muslim Brotherhood.”

“Yes, that is right,” Youssef told Al Arabiya, adding that he and the producer have been friends for 13 years.

The producer “does not interfere” in the program’s content, the comedian said.

The satirist regularly skewers the country’s ruling Islamists on his wildly popular weekly program, which is modeled on Jon Stewart’s U.S. satirical The Daily Show.

An Egypt court has summoned Youssef on grounds he insulted Islam and the president, a move which raised international concerns over freedom of expression in Egypt.

“If the regime thinks I am a clown, why are they scared?” Youssef asked.

“If my program brings down a regime, then this means it was a weak regime that did not deserve to stay in place. I never heard of a program that brought down a regime,” he said.

“We did not revolt against a regime that suppresses freedoms to replace it with a regime that [always reminds] us of the [alleged] freedom it gives,” Youssef said, adding that Mursi took the right decision when he dropped all charges against media figures.

Youssef also said that he will continue producing his show, adding that he will turn to YouTube if his program is ever shut down.

Al Arabiya television will air the full episode in Arabic on Monday 1200 GMT. It will also be available on Al Arabiya’s English portal with subtitles.
Al Arabiya