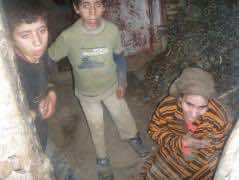 A video showing a mother with her two children in terribly inhumane conditions has went viral on YouTube, rending the hearts of thousands of Moroccans and exposing the bitter reality of the deep Morocco.

On the video captured by a humanitarian association, two children come out of what appeared to be a hole rather than a house, which they inhabited and a mother who sits down on the ground, having difficulty to move.

The two children appear poorly dressed and covered with dust from all sides. Their mother’s miserable appearance shows how abject the poverty they live in is.

While this video is showing a forgotten family in Morocco, there is no doubt that there are many other families facing the same predicament of marginalization, neglect, and inhumanity.

This video which is worth more than a thousand words is now an alarming call for more humanitarian associations to intervene and for the Moroccan authorities to re-consider the ignominy it has brought itself for ignoring such extremely poor families.