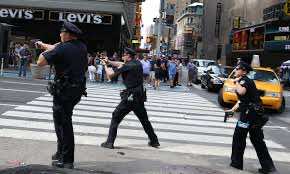 New York police stepped up security around key landmarks in the city on Monday after a double blast killed at least two people and injured 22 others at the Boston marathon, a top officer said.

“We’re stepping up security at hotels and other prominent locations in the city through deployment of the NYPD’s critical response vehicles until more about the explosion is learned,” Deputy Commissioner Paul Browne