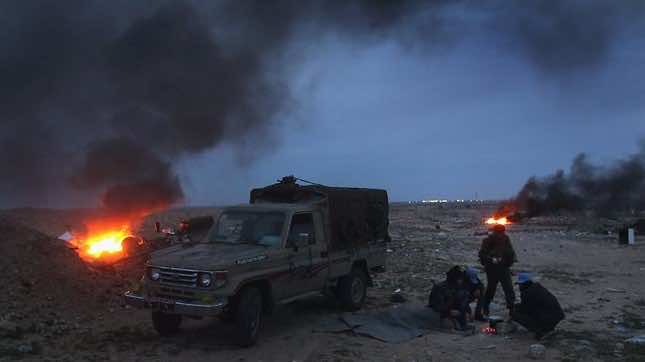 A former Guantanamo inmate and chief of the Ansar al-Sharia (Partisans of Islamic Law) group in Libya has escaped an assassination attempt, a security official told AFP on Monday.

The official said the attack on Abu Sofian Ben Guemou, a former inmate of the US prison camp at Guantanamo in Cuba, took place on Sunday in a suburb of the eastern town of Derna.

“Ben Guemou was ambushed while he was returning home in Derna on Sunday night,” the security official said, speaking on condition of anonymity. “One of those with him was hit in the shoulder.”

Immediately after the attack, a large number of Ansar al-Sharia militiamen deployed in the area around Ben Guemou’s home.

Ben Guemou, was handed over by the United States to the Libyan authorities in 2007.

The security source speculated that a tribe that had accused the militia chief of killing one of its members last week was behind the ambush.

Also known under his nom de guerre of Abu Fares, Ben Guemou, fought alongside Al-Qaeda in Afghanistan before being detained in 2004 by the Pakistani authorities and handed over to US forces.

After holding him for three months at Guantanamo, he was handed over to Libya, then ruled by Moamer Kadhafi, and was freed along with other Islamists in August 2010.

Ben Guemou was an Ansar al-Sharia member suspected of involvement in the attack on September 11 last year on the US consulate in Benghazi, in which US ambassador Chris Stevens and three other Americans were killed.

Eastern Libya, the cradle of the revolution that toppled and killed Kadhafi, has seen a wave of attacks on Western interests that are assumed to be the work of radical Islamist factions.