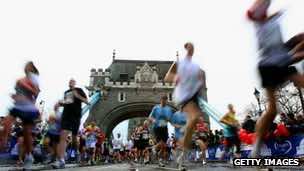 London Marathon organisers and British police are reviewing security measures for Sunday’s race after at least two people were killed and 23 wounded when two explosions struck near the finish line of the Boston Marathon on Monday.

While it has yet to be confirmed that the Boston explosions were caused by a terror attack, the shocking scenes quickly prompted fears of a similar incident at the London race.

Thousands of people, including leading international athletes, compete in the London Marathon every year and, with the race just six days away, there was speculation the event could be cancelled on safety grounds.

Nick Bitel, the London Marathon Chief Executive, insisted the race’s security procedures would be examined before any decision was taken.

“We are deeply saddened and shocked by the news from Boston,” Bitel said in a statement.

“Our immediate thoughts are with the people there and their families. It is a very sad day for athletics and for our friends and colleagues in marathon running.

“Our security plan is developed jointly with the Metropolitan Police and we were in contact with them as soon as we heard the news.”

Met Police Chief Superintendent Julia Pendry added: “A security plan is in place for the London Marathon. We will be reviewing our security arrangements in partnership with London Marathon.”

The explosions in Boston took place after the elite race had finished.

The Boston race, the world’s oldest annual Marathon, is held each year on the United States’ Patriot’s Day.