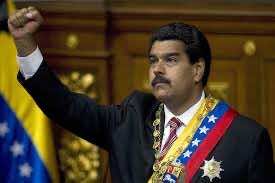 Venezuela’s electoral authorities on Monday confirmed acting President Nicolas Maduro as the winner of the weekend election to succeed Hugo Chavez, despite opposition demands for a recount.

Lucena gave final figures for the vote, and said Maduro won with 50.75 percent of the vote compared to 48.97 percent for Capriles — a difference of around 265,000 votes.

As the council made the announcement, Capriles supporters banged pots and pans outside their windows in an eastern neighborhood of Caracas as a form of protest.