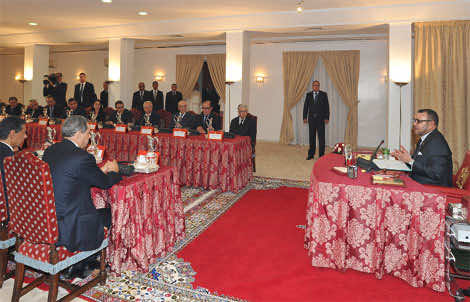 Following the announcement made by the US Embassy in Rabat on Friday that the American Administration intends to push for including a human rights monitoring mechanism within the mandate of the MINURSO in the Sahara, Morocco expressed its categorical rejection of the establishment of such a mechanism.

On Monday King Mohammed VI convened the members of the government, as well as the heads of the political parties to a meeting in the royal place in Fez devoted to discussing the “latest developments in the National Question at the United Nations, and especially initiatives aimed at distorting the mandate of MINURSO,” as reported by the Royal cabinet.

A statement issued after the cabinet meeting stressed that the establishment of this mechanism would derail the negotiations process towards finding a solution to the conflict based on the principles of realism and compromise, in line with Security Council resolutions.

“Since the Kingdom of Morocco presented, in April 2007, the Initiative for Negotiating an Autonomy Statute for the Sahara Region, the issue of human rights has been methodically exploited by the other parties to the dispute in an attempt to derail the negotiation process and use it as an excuse not to engage resolutely and in good faith in seeking a political solution,” the statement said.

“The bias of such a unilateral move without prior consultation, in terms of content, context and procedure can only evoke incomprehension and rejection,” it added.

The meeting emphasized the unanimity of all the components of the Moroccan people over the issue of the Sahara and renewed its hope that the Security Council will strive to keep the negotiations process on the right track.

“In any event, the Kingdom, fortified by the strong consensus of all components of the Nation over the national unity and the territorial integrity, remains confident in the wisdom of the members of the Security Council and in their ability to find appropriate formulas to preserve the political process from any missteps that would have significant and detrimental consequences on the stability of the region,” the statement concluded.

“Given ongoing reports of human rights violations, the need for independent, impartial, comprehensive and sustained monitoring of the human rights situation in both Western Sahara and the camps becomes ever pressing,” the UN chief said in paragraph 116 of the report.