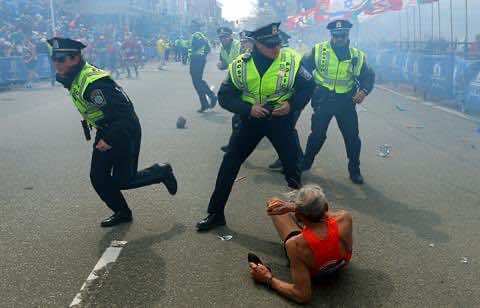 Two explosions struck one of America’s top sporting events Monday, killing at least three and wounding more than 100 as the Boston Marathon erupted in a maelstrom of blood, screams, smoke and panic.

As cities from New York to Los Angeles went on high alert, Americans with ever-vivid memories of the September 11, 2001 suicide airliner attacks automatically wondered if the country had been hit again by terrorists.

President Barack Obama went on national television to say it was not yet clear who was behind the blasts. He said the perpetrators would pay. He did not utter the word “terror.”

“We still do not know who did this or why. And people shouldn’t jump to conclusions before we have all the facts,” Obama said. “But make no mistake, we will get to the bottom of this, and we will find out who did this, we’ll find out why they did this.”

A senior White House official, speaking on condition of anonymity, said later that “any event with multiple explosive devices — as this appears to be — is clearly an act of terror.”

At the blast scene, a horrific chorus of high-pitched wailing and screaming rang out as bewildered runners and spectators fled the carnage and debris.

News reports said one of the fatalities was an eight-year-old boy and that some of the injured lost limbs. One woman told CNN the blast was the loudest sound she had ever heard, and it made the ground shake.

The thunderous blasts struck near the finish line of the marathon, long after the winners had crossed. Competitors who were still running when the blasts rocked downtown Boston were diverted elsewhere. Some 27,000 people were entered to take part in the event.