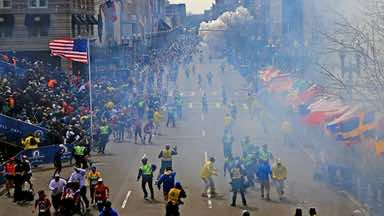 A massive probe was under way Tuesday after two bombs struck the Boston Marathon, killing at least three and wounding more than 100.

Monday’s blasts near the finishing line raised fears of a terrorist attack more than a decade after nearly 3,000 people were killed in suicide airliner strikes on New York, Washington and Pennsylvania on September 11, 2001.

President Barack Obama went on national television to warn against “jumping to conclusions” but a senior White House official, speaking on condition of anonymity, said such an attack was “clearly an act of terror.”

Special agent Rick DesLauriers, who heads the FBI’s Boston bureau, told reporters: “It is a criminal investigation that is a potential terrorist investigation.”

Russian President Vladimir Putin led a chorus of condemnation from across the globe describing the twin explosions as “barbaric”. 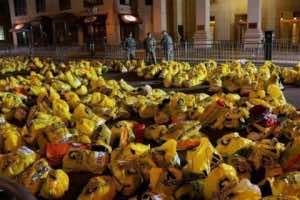 Unclaimed finish line bags belonging to runners viewed near the scene of a twin   bombing at the Boston Marathon on April 16, 2013. A massive probe is under way after two bombs struck the event, killing at least three and wounding more than 100.

German Chancellor Angela Merkel said she was “horrified” and that “nothing justifies such a malicious attack on people attending a peaceful sporting event”.

“There are some very sick people out there. Who would do something like this?” questioned running great Paula Radcliffe.

Security was stepped in major cities across the United States amid fears of a repeat of the September 11 attacks. Obama said those behind the blasts that were seconds apart will “feel the full weight of justice.”

At the scene, a horrific chorus of high-pitched wailing and screaming rang out as bewildered runners and spectators fled the carnage and debris.

An eight-year-old boy was reportedly among the dead. The Boston Globe identified him as Martin Richard, whose father William was running in the race. His mother and a sister were gravely injured while a second sister was unharmed.

More than 100 people were wounded, Massachusetts governor Deval Patrick said, without giving an exact figure. The Globe said more than 140 were hurt.

Graphic locating the first and second blasts at the Boston marathon where at least three people were killed and dozens injured Monday.

Surgeons worked into the night on the wounded from the two powerful blasts, which were about 100 yards (metres) from each other.

Some people had arms and legs torn off at the scene. Several victims had “traumatic amputations” at the race medical tent or in hospitals, said Alasdair Conn, head of emergency medicine at the city’s Massachusetts General Hospital, one of six that took victims from the incident.

A doctor at another Boston hospital told AFP that many of the injuries were from shrapnel, particularly BB pellets and tacks.

More than 27,000 runners participated in the 26.2 mile (42 kilometer) race that is one of the world’s most prestigious marathons. Tens of thousands of people were packed around the finish.

Secretary of State John Kerry, a former Massachusetts senator who has often fired the starting gun for the wheelchair portion of the race, was informed of the explosions as he returned from a 10-day trip, a senior state department official said.

Streets around the bomb sites were kept closed as forensic experts moved in.

View of the finish line after a terror attack at the Boston Marathon on April 15, 2013. A massive probe is under way after two bombs struck the event, killing at least three and wounding more than 100.

Terrorism expert Bill Braniff said the high profile race made a logical target for anyone “that wants to highlight their grievance” against the US, “and piggyback on the media that’s covering” it.

“It’s not a fortified target, you’re not trying to breach a police station and conduct an attack inside of that secure location. It’s an open venue, so you merely need to be present to conduct an attack,” he told AFP.

Video footage showed the detonation behind a row of national flags. One 78-year-old runner was blown to the ground and many bloodied spectators were pushed by the force of the blast through barriers onto the street.

“We saw people with their legs blown off,” Mark Hagopian, owner of the Charlesmark Hotel, told AFP from the basement of a restaurant where he had sought shelter.

“A person next to me had his legs blown off at the knee — he was still alive.”

A video grab shows the victims of one of the blasts at the finish line of the Boston Marathon on April, 15, 2013. A massive probe is underway after two bombs struck the event, killing at least three and wounding more than 100.

No group has claimed responsibility for the attack and the Pakistani Taliban, which claimed the 2010 Times Square bomb plot, denied any role in the bombings.

“We believe in attacking US and its allies but we are not involved in this attack,” Tehreek-e-Taliban Pakistan (TTP) spokesman Ehsanullah Ehsan told AFP.

US media reported that police were talking to a 20-year-old Saudi man who was near the scene of the explosion, but authorities have emphasized that they have made no arrests and were questioning many people.

A local news station reported that police had searched an apartment in a Boston suburb and removed several bags before dawn Tuesday. The local fire department confirmed on its Facebook page bomb techs had searched the apartment of a “person of interest.”

Meanwhile, police warned there would be heightened security around Boston on Tuesday with random checks of backpacks and bags on buses and commuter trains. Many streets would also remain closed.

Security was stepped up in New York and Washington — both sites of 9/11 attacks — as well as in Los Angeles and San Francisco.