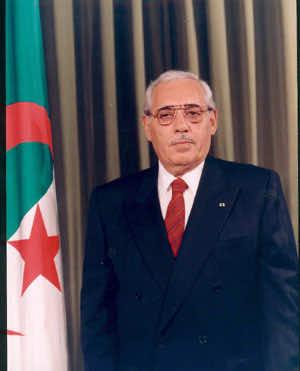 Algeria’s former head of state Ali Kafi,who was appointed after president Mohamed Boudiaf’s assassination in 1992 and
held office during a bloody period in the country’s civil war, died Tuesday aged 85.

Kafi, an army colonel who headed the military-backed High Committee of the State (HCE) until his replacement by Liamine Zeroual in 1994, died “in Geneva following an illness,” the presidency said in a statement.

The remains of the former leader will lie in state at the People’s Palace in Algiers before he is buried at El-Alia cemetery, the final resting place of other former presidents.

A colonel in the National Liberation Army during the war of independence against the French, Kafi served as Algerian ambassador in numerous countries, including Syria, Egypt, Iraq and Rome.

As a member of the collegial HCE presidency, he succeeded Boudiaf in July 1992 after the latter was assassinated by a bodyguard, and until the expiry of the High Committee’s mandate in January 1994, when he was replaced by retired
general Zeroual.

Kafi was born in the Skikda area of eastern Algeria to a poor family.

He became involved in the anti-colonial struggle at an early age, after the massacre at Setif, where nationalist unrest that broke out at the end of World War II was brutally suppressed by French forces, leaving thousands dead.

Algerian politics has been dominated in recent decades by ageing former members of the struggle against French rule, with 76-year-old Bouteflika currently serving his third term as president after coming to power in 1999.