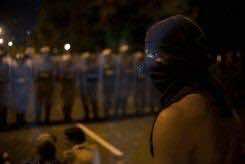 “The most serious thing is that in these violent actions, seven Venezuelans died,” said Attorney General Luisa Ortega, adding that 61 were injured. So far, 135 people have been arrested, she said.