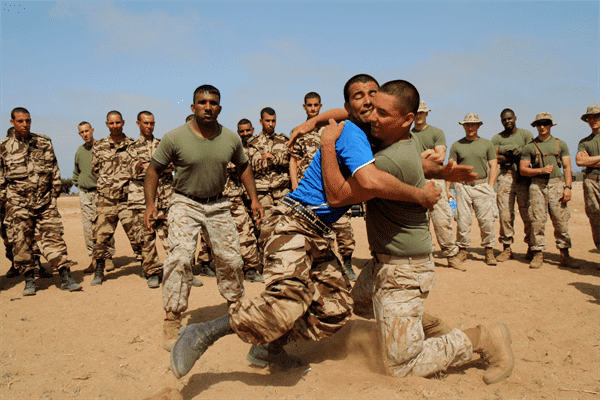 US troops are to redeploy from Morocco after Rabat cancelled annual war games in the kingdom, the US army said Wednesday, amid sharp disagreement over plans for a UN mission in the Sahara.

The “African Lion 2013” joint military exercises, which was supposed to run to April 27, were to involve 1,400 personnel from US Africa Command (Africom) as well as 900 members of the Moroccan armed forces.

Their cancellation comes as US-backed plans emerged on extending the mandate of the UN peacekeeping mission in the Sahara to probe alleged human rights abuses, an initiative categorically rejected by Morocco.

“We’re readying those troops for redeployment to where they came from sooner than we had planned for,” Africom spokesman Chuck Prichard was quoted by AFP as saying.

“The exercises have been deferred at the request of the kingdom of Morocco,” and no new date had been set for them to resume.

“As far as the reasons why the Moroccan officials made those decisions, I’d have to refer you to them,” he added.
On Tuesday evening, the Moroccan government spokesman declined to comment on reports the military exercises had been cancelled.

But he called plans to alter the mandate of the UN peacekeeping mission in Sahara, officially known as MINURSO, an attack on Morocco’s sovereignty that would have “harmful consequences” for regional stability.

This joint military exercise , which was due to take place throughout Morocco starting from Wednesday, and was geared to building “military partner-nation capacity,” involved amphibious and peacekeeping operations, aerial refueling and low-level flight training.

Washington is expected to present to the 15-nation UN Security Council next Monday its proposal that MINURSO’s mandate be extended to monitor rights in the Sahara.

Such a “biased and unilateral initiative” is “an attack on the national sovereignty” of the country and would have “harmful consequences for the stability of the region,” Khalfi was quoted by AFP as saying.

“It is unjustified because it fails to take into consideration the collective efforts made by Morocco to promote human rights,” he said, adding that Rabat was “counting on the prudence of the Security Council members.”

“The urgency of the regional situation compels us… to uphold the spirit of compromise… to achieve a just, lasting and mutually acceptable political solution,” the minister said, while condemning an attempted “exploitation of human rights.”