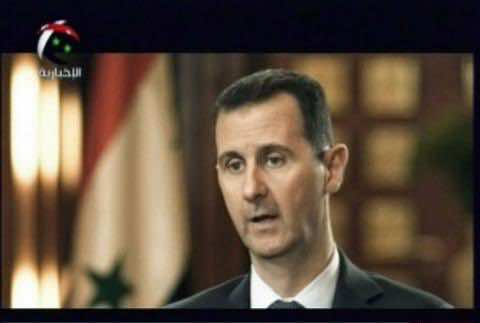 President Bashar al-Assad warned Western states on Wednesday that they will pay a heavy price at home for their alleged support of Islamists in the Syrian conflict and said defeat of his regime was not an option.

Assad, whose regime has been battling rebels trying to oust him since March 2011, told Al-Ikhbariya state television that the West is playing with fire, according to excerpts released by his office.

“The West has paid heavily for funding Al-Qaeda in its early stages. Today it is doing the same in Syria, Libya and other places, and will pay a heavy price in the heart of Europe and the United States,” Assad said.

The embattled Syrian president also warned that a defeat of his government would spell the demise of Syria, and vowed that he will not “surrender.”

“There is no option but victory, otherwise it will be the end of Syria and I don’t think that the Syrian people will accept such an option,” he said.

The interview — part of which was posted on the presidency’s Facebook page — has been timed to coincide with Syria’s Independence Day, which marks the 1946 end of French rule.

Assad sounds a nationalistic note, and slams Western and Arab countries who support the rebels.

He takes to task neighbour Jordan, accusing it of allowing rebels free movement across its borders.

“I cannot believe that hundreds (of rebels) are entering Syria with their weapons while Jordan is capable of arresting any single person with a light arm for going to resist in Palestine,” Assad said.

Jordan is hosting thousands of Syrian refugees, opening its border to those fleeing the conflict, but Damascus also accuses it of harbouring rebels and allowing them free movement over the border, as well as arms shipments.

Assad has repeatedly blamed “enemies” and conspirators for the deadly unrest rocking Syria, where the UN says more than 70,000 people have been killed in violence over the past two years.

Ahead of the interview, state television showed footage from the French Mandate era (1920-1946), drawing parallels between “the heroes of independence” and the Syrian army today.

“The commemoration of the departure of the last French soldiers is a glowing page in the history of Syria, and the heroes of our brave army are today waging battle against terrorism,” it said.

“The Syrian people will not allow France to return to their country through its support for armed terrorist groups, and by conspiring to cause Syrian bloodshed.”

On Tuesday, Assad issued a decree offering pardons or lighter sentences to army deserters and certain categories of smugglers. But it came with a string of exceptions, and does not apply to those taking up arms against the regime.

Meanwhile, staunch Assad ally Russia warned that the Friends of Syria grouping of countries opposed to the regime in Damascus was playing a “negative” role in resolving the conflict.

“Right now we see this process is making a negative contribution to the (Geneva) decisions,” Russian Foreign Minister Sergei Lavrov told reporters in Istanbul, referring to a 2012 accord aimed at ending the conflict through talks between all parties.

“When one party is isolated in any mechanism set up to deal with a conflict, we miss the ground for dialogue,” he said.

Lavrov’s comments came ahead of a key Friends of Syria meeting in Istanbul on Saturday to be attended by US Secretary of State John Kerry as well as several of his Western and Arab counterparts.