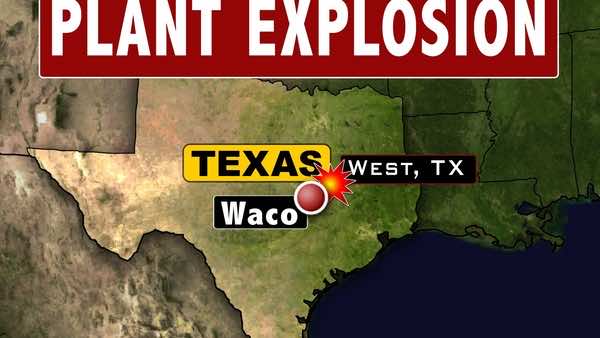 Some 60 to 70 people were killed and hundreds were injured by an explosion at a fertilizer plant outside Waco, Texas, local media reported, citing the local emergency manager.

The report could not be immediately verified by AFP, but KWTX television cited West Emergency Management Services Director George Smith as confirming the death toll.

The explosion comes as the United States was on edge as it pieces through deadly explosions that hit the Boston marathon on Monday, followed by letters, apparently poisoned with ricin, sent to President Barack Obama and a U.S. senator.

Firefighters responding to the scene in West were also injured in a secondary blast, according to radio traffic by emergency managers being broadcast by CBS News.

“There has been an explosion on the fire scene, there are firefighters down at this time,” a dispatcher said.

A man on the scene reported that “the restroom is severely damaged we have many people down.”

Firefighters also said they were setting up a triage unit at an apartment building where people were trapped.

The cause was not immediately known but he said it was a anhydrous ammonia explosion.

Fire departments from nearby jurisdictions rushed to the scene in the small town of West, north of Waco, where the blast was so powerful that it knocked down some nearby buildings, and set fire to others.

“An explosion has ignited adjacent structures to the plant,” Yeager said.

The injured were being rushed to local hospitals.

Neighbors told local media that their windows were blown out by the force of the explosion.

“It was a small fire and then water got sprayed the ammonia nitrate, and it exploded just like the Oklahoma City bomb,” Jason Shelton, a clerk at the Czech Best Western Hotel in West, told The Dallas Morning News.

“I live about a thousand feet (300 meters) from it and it blew my screen door off and my back windows. There’s houses leveled that were right next to it. We’ve got people injured and possibly dead.”

Bill Bohannan, who was visiting his parents in West, near the plant, witnessed the explosion.

“It knocked us into the car… Every house within about four blocks is blown apart,” he told the Waco Tribune-Herald.

Crystal Anthony told the paper that a nearby nursing home, apartment complex and West Middle School had also caught fire. Anthony said she and her daughter were almost knocked down several blocks from the explosion.

“We’ve been moving patients out of the nursing home and taking them to the football field and gymnastics building on Davis Street,” she added.

April 19 will be the 20th anniversary of the Waco siege, a deadly confrontation between federal authorities and heavily armed locals there.

After a 51-day standoff, a gun battle broke out with U.S. agents and the Branch Davidian religious group’s compound burned.

Dozens of people were killed in an incident that many far-right groups see as a symbol of egregious U.S. government overreach.