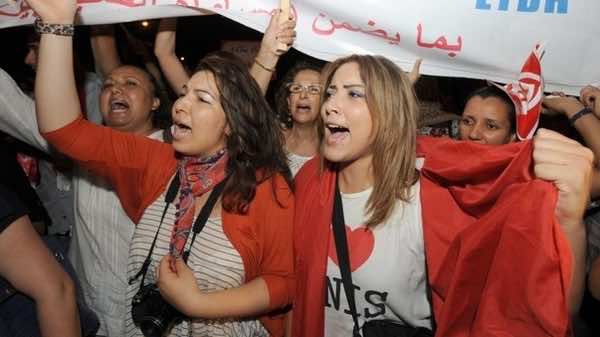 Hardline Islamists threw stones and bottles at young women in a student hostel in Tunis to stop them staging a performance of dance and music, witnesses said on Thursday, in another blow to secular freedoms in the country that spawned the Arab Spring.

Since secular dictator Zine al-Abidine Ben Ali fell two years ago in the first of multiple revolts across the Arab world, moderate Islamists have won election and radical Muslims have targeted symbols of a hitherto mainly secular society.

Female university students housed at the Bardo district hostel in the capital were just starting a weekly show of dance and music on Wednesday evening when dozens of hardline Salafists broke into the premises after scaling its walls, witnesses said.

“They smashed windows on our building and threw stones and bottles at the students, stopping the performance,” said Rim Nsairi, one of the students, who are aged 19 to 24.

The disturbance lasted almost an hour before the assailants fled. There were no serious injuries and no arrests.

“This is unacceptable … The police were present and did not move. It just raises anger and fear,” said Ameni, another student who did not want her last name used. The Interior Ministry, which runs the police, had no immediate comment.

Hostel administrator Raja Madyouni said the university had now tightened security. Salafists had previously threatened female students because of their Western dress and in some cases smoking and relations with young men, according to Madyouni.

It was the latest in a spate of Salafist assaults in the North African state, long among the most secular in the Arab world, over the past year.

Last week, Islamists burst into a secondary school and assaulted its principal after he barred entry to a teenage girl wearing an Islamic face veil. Police fired at Islamists, killing one, after their station came under attack in a southern town.

Tunisian police blamed Salafists for the assassination of secular opposition politician Chokri Belaid in February, which provoked the biggest street protests in Tunisia since the overthrow of Ben Ali in January 2011.

Salafists have also attacked wine sellers in several Tunisian cities, prompting secularists to accuse them of having formed a religious police and threatening the state.

Salafists intervened to scuttle the staging of several concerts and plays in several cities last year, declaring that they violated Islamic principles. Last September, hardline Islamists ransacked the U.S. Embassy in Tunis during worldwide Muslim protests over an anti-Islam video posted on the Internet.

In another sign of growing Islamist-secularist friction, Habib Kozdhogli, head of the arts faculty at Tunis university, is go on trial on May 2 charged with slapping a veiled student who insisted on entering a class last year.

Moderate Ennahda Islamists who won a free election now head a coalition government in Tunis. But Salafists are pressing for Islam to be made the law of the land and secularists say Ennahda is doing little to safeguard individual and women’s rights.