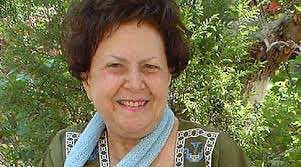 The leader of Egypt’s tiny Jewish community was buried in Cairo on Thursday in a dilapidated cemetery that has come to symbolise the dying community.

More than a hundred mourners, including Christians and Muslims as well as Jews from both Egypt and abroad, attended the funeral of Carmen Weinstein under tight security in central Cairo’s Shaar Hashamayim synagogue.

“Egypt has lost a great lady,” said Rabbi Marc Elfassi, who lives in France but has overseen rites in Egypt for nine years.

“Before each prayer, she told me: ‘Please pray for my country, Egypt, to be as happy as it was when I was young,” he told the congregation.

Weinstein, who was in her early eighties when she died this week, worked tirelessly to preserve Egyptian Jewish heritage and for the restoration of such monuments as the downtown Cairo synagogue.

Estimates of the Jewish population in Egypt range from about 200 to a few dozen, mostly elderly women, a fraction of the 80,000 strong community whose members were expelled or left the country in the early 1950s.

“I promise to members of our community to take care of them. I’d like to give a view of what will be the future of this unfortunately dying community,” Haroun said at the funeral service.

“I want to break the barriers that have been erected between people of this religion and people of other beliefs. I want everyone to remember that Egyptian Jews were living in Egypt and participated in all aspects of life,” she added.

After the service, Weinstein was buried in the Bassatine Jewish cemetery in a Cairo suburb. Her relatives said she wished to be buried alongside her parents, but sewage had flooded that part of the graveyard.

“Look at the humiliation and the filth in which we will be buried,” said Haroun.

“But what to do? The area around should be developed, its residents must be allowed a decent life, so they preserve their surroundings,” she said of the neighbouring slums.

Roger Bilboul, who came from France for the funeral, said he found the state of the graveyard “sad.” “There was a metal door, it was stolen.”

There are few gravestones left amid the rubbish. Most of the marble slabs have been stolen too.

“But heritage goes beyond buildings, cemeteries and objects,” Bilboul said. “It also captures the history and identity of people scattered in the four corners of the world.” 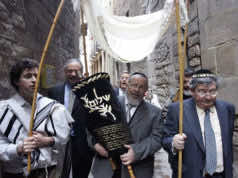