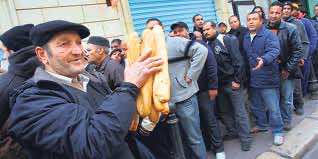 Tunisia ordered a drastic reduction in the price of some consumer goods on Thursday to cool inflation in the face of simmering social tensions, which economists warned could lead to shortages.

The commerce ministry unveiled price cuts that include 43 percent on potatoes, 10 percent on eggs, six to nine percent on red meat, 15 percent on vegetable oil and five to 13 percent on milk derivatives.

These are added to a list of household goods that have been subsidised for decades, notably milk, bread and fuel.

“That has never worked elsewhere, and it won’t work in Tunisia,” Ezzedine Saidane, an independent economist, told AFP.

“Some products will go through parallel distribution chains, which families with the lowest incomes wont have access to… and the producers could cut back their output, creating shortages,” he said.

A study published last month by the National Statistics Institute and the African Development Bank revealed the long-term lack of efficiency of price controls on sales in Tunisia, with the main beneficiaries not being the poorest members of society.

The announcement comes amid bristling discontent in Tunisia, where youth unemployment, entrenched poverty in parts of the country and high living costs, all key factors behind the January 2011 revolution, have fuelled social unrest.

Inflation, driven by rising food prices, rose to 6.5 percent in March from a year earlier, the National Statistics Institute said, in what the central bank called a 50-year record.