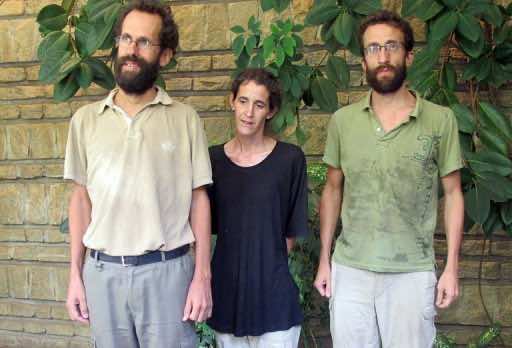 A French family of seven abducted by Islamic extremists while holidaying in Cameroon have been freed after two months in captivity, officials said Friday.

The hostages — a father, mother, four young children and their uncle — were all in good health, the French presidency said, adding that Foreign Minister Laurent Fabius was on his way to the central African state to greet the family.

Cameroon’s President Paul Biya said in a statement read on national radio that the hostages — who were seized by six gunmen on February 19 and taken to neighbouring Nigeria — had been “handed over last night to Cameroonian authorities”.

Biya did not say how the family was freed but he thanked the governments of Nigeria and France.

Fabius told AFP the family were released overnight on Thursday “in an area between Nigeria and Cameroon (…) I spoke to the family on the phone. They are extremely happy and in good shape.”

The family arrived Friday at the French embassy in Yaounde, the Cameroonian capital.

“The children are well,” their father Tanguy Moulin-Fournier told AFP, speaking of four boys aged between five and 12. “We are so happy to come back to Cameroon, to be able to see our friends again and all our Cameroonian brothers, I tell you this with tears in my eyes.”

Moulin-Fournier, who worked for French gas group GDF Suez in Yaounde, wore a long beard and looked thin when he arrived at the embassy, accompanied by the children – Eloi, Andeol, Mael and Clarence – and his wife Albane and brother Cyril.

They had been held by the Islamist extremist sect Boko Haram from Nigeria, which is blamed for killing thousands of people in the north of the neighbouring country since 2009.

Their abduction came just as France was deploying thousands of troops to fight Islamic extremists in Mali, another former French colony in the region.

French President Francois Hollande insisted after their release that France had not paid any ransom. He noted that eight other French citizens are still being held hostage in the semi-arid Sahel region south of the Sahara.

Moulin-Fournier made no comment on how his family were released.

A video surfaced last month in which he seemingly asked President Biya to free detained members of the Al-Qaeda-linked Boko Haram group.

The family, who took up residence in Cameroon in 2011, were visiting the Waza National Park when they were kidnapped. They had moved to Yaounde when the father began a job there overseeing the construction of a liquid natural gas plant. His brother lives in Barcelona, Spain.

Just before he left for Yaounde, Fabius told RTL radio that he planned to bring the family back to France “tomorrow morning, first thing” on Saturday.

The foreign minister also said the freed hostages would undergo “medical tests because they have lived for two months in extremely difficult conditions”.

In a video released in late March, a Boko Haram spokesman said: “We affirm to the world that we shall not free the French hostages as long as the members of our families are imprisoned in Nigeria and Cameroon. Force will not work to free them, we are ready to defend ourselves with force.”

Boko Haram has in the past called for the creation of an Islamic state in Nigeria, where corruption is deeply rooted and most of the population lives on less than $2 per day despite its vast oil reserves.

Boko Haram’s insurgency and the military crackdown is estimated to have left more than 3,000 people dead in Nigeria since 2009, including many killed in operations by the security forces.

The group is believed to be made up of many different factions. Analysts say some members are likely hardcore Islamists who would resist any concession to Nigeria’s secular government.

Nigerian President Goodluck Jonathan recently instructed his security advisors to look at whether an amnesty could help curb the Boko Haram insurgency.