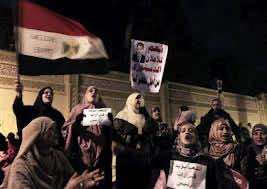 The two sides pelted each other with stones and Molotov cocktails and gunfire was heard, an AFP journalist said.

They were demanding an overhaul of the judiciary, after a court challenged a decision by Islamist President Mohamed Morsi to sack the veteran state prosecutor.

Morsi’s Muslim Brotherhood had called the demonstration outside the Supreme Court, which has repeatedly challenged Morsi since he took office last June.

“The people demand the cleaning up of the judiciary,” the protesters chanted.