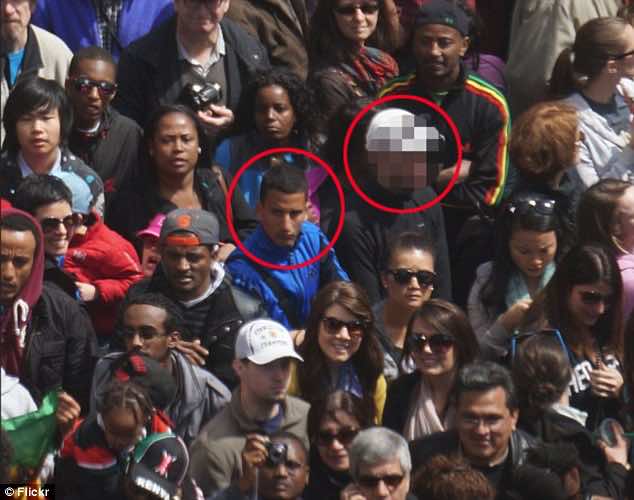 The FBI wrongly and publicly identified two men as suspects. Could this have been avoided?

Following Monday’s horrific bombings at the Boston Marathon, Moroccan track coach Yassine Zaimi and Moroccan student and runner Salaheddin Barhoum, 17, were targeted by the FBI because they stood near the bomb site wearing large backpacks. The FBI released photos of the two young men in hopes someone could identify them. The New York Post and other media outlets publicized the photos. Soon after, the men were found innocent but the psychological damage had already been done.

Barhoum learned via his friends and social media that he was a wanted suspect. Meanwhile, the public learned that a department store video revealed two other suspects of similar description – wearing backpacks and baseball caps – but we were not shown the video or photos until much later. Whether the FBI learned its lesson from releasing the earlier photo of the Moroccans is unclear, but the misstep is devastating to these men who were later shown to be innocent.

“I’m going to be scared going to school,” Barhoum told The Huffington Post. “Workwise, my family, everything is going to be scary.” This high school teenager is not much younger than the 19 year-old suspect on the run Friday and was unlucky to be at the wrong place at the wrong time. This teen came of age in the decade following 9/11, in a generation that is familiar with racial, ethnic and religious profiling but also cognizant of the careful language of political correctness used so often to veil what people really think.

One hopes that these two young men were not immediately targeted because of their race and appearance. We do know that racial, ethnic and religious profiling continue in a world where counterterrorism monitoring is a way of life. Law enforcement evaluates all indicators of terrorist activity, not just behavior but a person’s overall profile. Sadly investigators are forced to continue with such profiling because self-proclaimed jihadists around the world continue to incorrectly invoke Islam in their actions and use the religion as justification for killing innocents. In the case of the Boston bombings, viewers and readers waited to see ‘who did this’; if they were foreign or national; and if they were motivated by some grievance or ideology.

Despite the reality today of counterterrorism work, media and law enforcement have an ethical duty to not incorrectly and publicly pin criminal blame on innocent people. This is even more important when blame has been assigned in part by online ‘sleuths’ rather than by law enforcement.

What happened this week to Barhoum and Zaimi can cause permanent damage in a person’s life, potentially erasing years of efforts by immigrants just like them to assimilate and live like regular Americans, and to be accepted as Americans and as Moroccans, Arabs, Chechens or any other ethnicity connected with terrorism in the past. While people of any race or ethnic group would have been devastated to see their faces splashed all over social media and The New York Post as suspected killers, such an impulsive decision also hurts communities like Arabs, Muslims, Moroccans and North Africans.

It increases suspicion of immigrants, which is not a new trend but one that is increasingly frustrating in this century when our immigrant population is so diverse. Social media creates a demonic rumor mill and lives are devastated broadly in a matter of minutes. Even in a dangerous atmosphere when killers are on the loose, it is better to work behind the scenes and only engage the public when absolutely necessary.