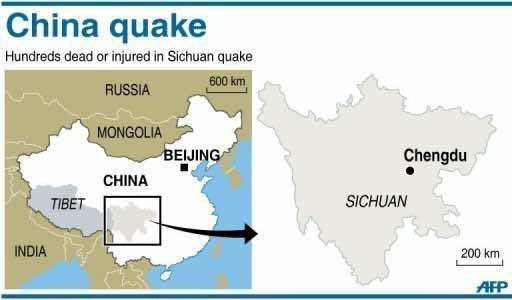 The shallow earthquake struck just after 8:00 am (0000 GMT) at a depth of 12 kilometres (seven miles), sending panicked residents fleeing into the streets, some of them still in their pyjamas, and was followed by several aftershocks.

Local seismologists registered the quake at magnitude 7.0 while the US Geological Survey gave it as 6.6.

“The earthquake in Ya’an, Lushan, has injured or killed hundreds of people,” the Sichuan earthquake bureau said, according to an official government website.

USGS said that “significant” casualties were likely and that “extensive damage is probable and disaster is likely widespread”.

“Past events with this alert level have required a national or international level response,” it added.

The tremors were felt as far as the megacity of Chongqing, home to around 30 million people, several hundred kilometres to the east, with Xinhua showing images of residents outside their apartment buildings after feeling the shaking.

Xinhua news agency said 2,000 troops were being dispatched to the area.

It quoted a resident in the provincial capital Chengdu, who was on the 13th floor when the quake hit, as saying he felt the shaking for about 20 seconds and saw tiles fall off nearby buildings.

In downtown Chongqing, Xinhua quoted a resident as saying: “I saw the lamps were swaying and water in my fishbowl stirring.”

Users of the Twitter-like Sina Weibo said they felt the quake in a number of surrounding cities.

In 2008 the province saw one of the country’s worst earthquakes in decades, with 87,000 people missing or dead.

That quake, which struck west-northwest of Chengdu, generated an outpouring of support, with volunteers rushing to the scene to offer aid and then-premier Wen Jiabao also visiting.

The disaster flattened swathes of the province along with parts of neighbouring Shaanxi and Gansu.

But there was public anger after the discovery that many schools fell while other buildings did not, creating suspicion of corruption and corner-cutting in construction.

The deaths of the children became a sensitive and taboo subject in the heavily controlled domestic media and social media websites.

Houses were toppled and people slept outdoors for fear of aftershocks, as emergency workers struggled to clear mountain roads blocked by the landslides to reach survivors.

A magnitude-5.5 earthquake in Yunnan last June killed four people and injured more than 100. Another 5.4 tremor the year before near the border with Myanmar left 25 people dead and injured 250.