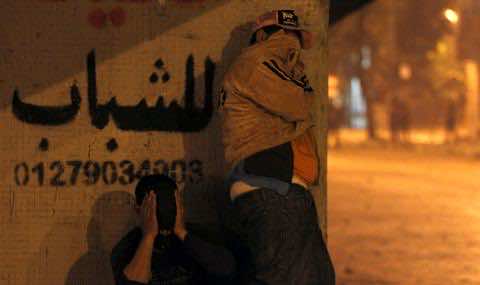 Egyptian police made 39 arrests after clashes between Islamists and opponents that saw both sides use firearms in central Cairo, leaving more than 100 people injured, officials said on Saturday.

A judicial source said prosecutors have begun questioning the suspects, as the health ministry said Friday’s violence had injured 105 people.

The clashes began after opposition activists marched on Islamists holding a rally outside the Supreme Court to demand the ouster of judges they believe are opposed to Egypt’s Islamist President Mohammad Mursi.

The violence, in which opposition activists fired birdshot rounds on Islamists and then at riot police, centred around the iconic Tahrir Square, epicentre of mass protests in early 2011 that toppled president Hosni Mubarak.

Footage posted on YouTube showed two men among the Islamist protesters also firing what appeared to be homemade guns.

Mursi’s presidency has been plagued by deadly clashes between protesters and police, a revolt in Suez Canal cities, sectarian violence and a devastating economic crisis, which many fear is bringing Egypt to the brink of chaos.

The Islamists rallying on Friday were demanding an overhaul of the judiciary, which they believe is hostile to Mursi, who took office last June.

Last month, a court overturned a controversial decree by Mursi to sack state prosecutor Abdel Meguid Mahmud, appointed by Mubarak, and replace him with Talaat Abdallah.

A court has also overturned Mursi’s call for parliamentary polls this month, ruling that he had ratified a new electoral law without consulting the constitutional court.