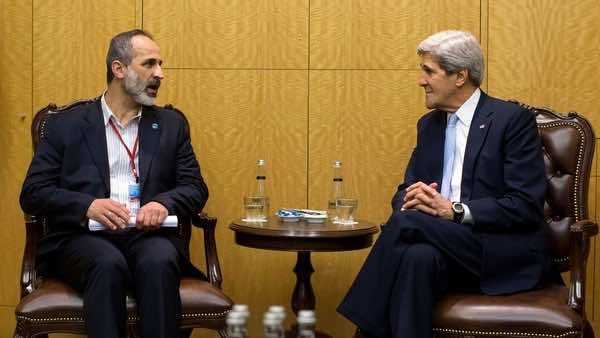 The United States is set to boost its support for Syria’s rebels at a meeting of the opposition’s main foreign backers Saturday and could for the first time agree to supply non-lethal military gear.

But Washington is expected to stop short of agreeing to rebel demands for arms as the 11-nation core group of the “Friends of Syria” hold talks in Istanbul with key figures in the opposition battling President Bashar al-Assad.

Top diplomats from the 11 countries — including the United States, European nations and Arab countries — then began their meeting, to be followed by a working dinner with the opposition.

Ahead of the talks, a senior U.S. official said Kerry would discuss increasing assistance to “moderate opposition groups” including the Coalition and the rebel Supreme Military Council.

The official said the aid to rebel fighters could go “beyond military food rations and medical kits to include other types of non-lethal supplies,” but said the details still needed to be worked out.

U.S. media reports have suggested Washington is preparing to provide protective battlefield equipment to the rebels such as body armor, armored vehicles and night-vision goggles, as well as communications gear.

But such supplies may hinge on the opposition showing it can be more inclusive, protect minorities and respect human rights.

Speaking to U.S. lawmakers this week, Kerry said Saturday’s talks would be an effort to “get everybody on the same page with respect to what post-Assad” Syria will look like.

“We also want to make certain that the people we’re working with are committed to pluralism, diversity, to a democratic process,” Kerry said. “There have to be a series of guarantees.”

A Western diplomatic source said the Friends of Syria would be looking for the opposition to “take a firm stand on extremism and chemical weapons” and commit to finding a political solution to Syria’s crisis.

The opposition is pressing its foreign allies to supply arms to the rebels, but analysts said it was unlikely Saturday’s meeting would mark a major breakthrough.

In a statement on Saturday, the opposition Coalition made clear it wanted support beyond humanitarian assistance.

“While humanitarian aid is a dire necessity, the Syrian opposition is also looking for support that will enable the immediate fall of the regime and an end to the suffering of the Syrian people,” the statement said.

Many in the West have raised concerns about arming the rebels, fearing weapons could fall into the hands of radical Islamist groups like the al-Nusra Front, which this month pledged allegiance to al-Qaeda.

Britain and France have been pushing for a European Union arms embargo to be allowed to expire by the end of May, but Paris has appeared more wary about arms supplies since the al-Qaeda pledge.

Supporters of arms supplies have said the rise of Islamist groups like al-Nusra is only a stronger argument for providing weapons to more moderate voices in the Syrian opposition.

The Friends of Syria group has struggled to come up with a united strategy to end the violence in Syria, despite fighting that has seen more than 70,000 killed and hundreds of thousands forced from their homes.

Washington has been gradually shifting its policy on providing assistance to the opposition, with Kerry announcing at the last Friends of Syria meeting in February that the U.S. would start providing direct non-lethal aid to rebel fighters.

Overall, the United States has already provided $117 million in non-lethal aid to the opposition and $385 million in humanitarian assistance to help the estimated four million people displaced inside Syria and the 1.2 million refugees in neighboring countries.