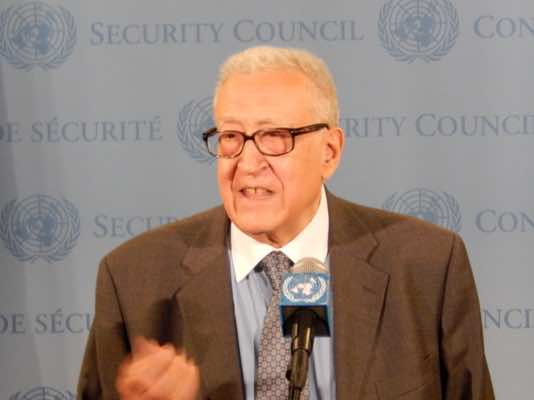 Lakhtar Brahimi did not resign yesterday when he briefed the Security Council about his mediation efforts in Syria, but he did criticize the Arab League decision to offer official recognition to the Syrian Coalition during the closed-door meeting, which he said means, for the Arab League, the Geneva process he has been promoting is “obsolete”.

Since the Arab Summit decision at the end of March, speculation has fueled that Brahimi will resign. Brahimi reportedly feels that the decision compromises his task to impartially mediate a political solution between the warring parties because his mandate as the Joint Special Representative is to negotiate on behalf of both the UN and Arab League.

Immediately following the meeting, Brahimi addressed reporters on his future. “I haven’t resigned. Everyday day I wake up I think I should resign. But I haven’t so far. One day perhaps I will resign and I am sure you are going to find out. But for the moment I haven’t resigned.”

While he evaded answering reporters’ questions about whether he felt the Arab League decision undermined his efforts, in the meeting with the Security Council he spoke more directly on the decision’s impact.

“If the language of the resolution is to be taken literally, this means that for the League of Arab States, the Geneva process is to be considered obsolete; no dialogue or no negotiations are necessary,” according to a copy of his statement. The words clearly mark a strong disapproval by an appointed representative of the Arab League.

On Monday, Brahimi is scheduled to meet with UN Secretary-General Ban Ki-Moon and the Secretary-General of the League of Arab States, Nabil El-Araby, when the three officials are expected to discuss further his continued participation as mediator.

Other highlights from Brahimi’s remarks before the UN Security Council yesterday included him apologizing to the Security Council and Syrian people for his efforts not having born more success. “I am personally, profoundly sorry that my own efforts have produced so little.”

Brahimi did not propose a new strategy but repeated his belief that the establishment of a transitional governing authority, as called for in the Geneva Communiqué, could provide a solution to the conflict.

In this regard, he had high praise for Syrian Coalition Chairman Moaz al-Khatib’s offer on January 30th to negotiate with the government on the composition of this body, which Brahimi described as having been “a breath of fresh air and a ray of hope in a profoundly bleak situation.” Brahimi stressed Al-Khatib’s offer should be revisited despite having been over-ruled by other colleagues in the Syrian Coalition.

During the briefing, Brahimi claimed, “… the regime is not quite ready to listen, the opposition not as united as it should be around an established leadership and a credible, constructive political program.”

His criticism of the opposition included noting the consensus that the Coalition now requires among the 70 members of its General Assembly in order to take decisions and those among it who seek to “provoke external intervention.”

On the other hand, Brahimi stated, “It is perfectly legitimate for them to demand that Assad leave office and his regime be dismantled,” although he expressed to the Council that this can be achieved through a political process.

The Syrian regime, for its part, “should give up its dream of a military victory. This is not going to happen,” he stated.

Brahimi also confirmed that Hezbollah and Iran are present militarily on behalf of the regime, though he said he did not know the scale and size of this presence. Likewise, he said he has no way of knowing the full extent of the number of foreign fighters and the number of al-Nusrah and other extremist linked fighters in the country, who are a serious concern but, he suggested, should not distract the international community from the main issue of resolving the conflict.

“I fear the debate may now shift to arguments about the importance of Al-Qaeda and associated groups and how that will, or should, affect the attitude of regional and international players.”

Describing the conflict, Brahimi chose to quote the analysis of Peter Harling of the International Crisis Group, who wrote earlier this week that the Syrian conflict is not the consequence of “communal hatred” but as being “the product of an international standoff…that disfigures Syrian society more than it reflects it.”

Speaking with the press afterwards, he said, ““If they [Security Council members] really believe that they are in charge of looking at peace and security, there is no time for them to lose, to really take this question more seriously than they have until now.”

One diplomat said, “It was certainly a more somber and sad briefing than the last time Brahimi briefed the Council.”