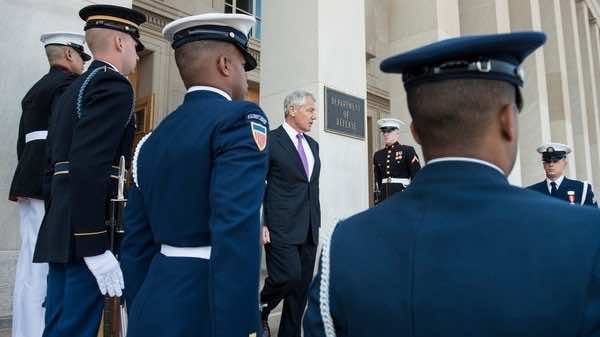 Asked if a multi-billion dollar arms package with Israel was designed to convey a message that a military strike remains an option, he said: “I don’t think there’s any question that’s another very clear signal to Iran.”

Hagel was speaking just before his plane touched down in Tel Aviv to present Israel and Arab states with a $10 billion arms deal to defend themselves from Iran on his week-long trip to the Middle East, which kicked off on Sunday.

In a two-day visit to Israel, Hagel will seek to counter criticism from some U.S. lawmakers and pro-Israel groups that he is too soft on Iran and too hostile to the Jewish state — a charge he has vehemently rejected.

Hagel is expected to tout the arms deal as a demonstration of Washington’s commitment to Israel’s security and as a way of countering Iran’s military power and nuclear ambitions.

The unveiled arms deal will provide U.S. military aircraft and missiles to Israel, Saudi Arabia and the United Arab Emirates, according to AFP news agency.

The United States and Israel have disagreed over the urgency of the threat posed by Iran’s nuclear program, with Washington maintaining there is still time to see if tough sanctions and diplomacy persuade Tehran to change course.

After Israel, Hagel will travel on to Jordan, Egypt, Saudi Arabia and the United Arab Emirates.

Under the unusual U.S. arms package announced Friday, which was negotiated simultaneously with Israel, Saudi Arabia and the UAE, the United States plans to sell advanced missiles to the Saudis and more than two dozen F-16 fighter jets to the United Arab Emirates.

With the Gulf states anxious over Iran’s nuclear and missile programs, the Pentagon has agreed to billions of dollars of arms sales designed to bolster the Arab nations’ air power and missile defenses.