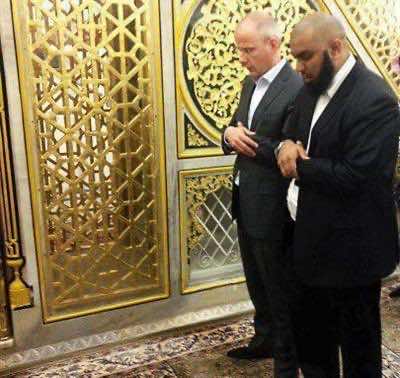 Arnoud van Doorn, a former member of the Dutch right-wing Freedom Party, recently converted to Islam, regretting his contribution to the producion of the Dutch anti-prophet film.

According to the Saudi ‘Oukad’ newspaper, Van Doorn visited the holy Prophet’s Mosque and wept in repentance for his ‘evil’ deeds.

“I used to belong to the party that shows stiff hostility towards Islam and the prophet Mohamed, “he was quoted by the newspaper as saying.

“Muslims’ reactions against the anti-Islam film induced me to seek the truth about Islam,” he added, shedding tears of remorse.

While Van Doorn castigated his former party for offending Islam in general and prophet Mohamed in particular, he decided to renounce his past leanings to embrace Islam and defend Muslims.

“Reading about Islam has totally changed my previous hatred-laden attitude towards this peaceful religion,” he told the newspaper.

During his visit to Mecca, Van Doorn met and interviewed several Sheikhs, including Sheikh Ali Hudhaifi and Sheikh Salah Budair.

At present, he intends to pay a visit to other holy places and meet more Muslims from different corners of the Muslim world.

I am going to Mecca to perform Umrah, and I will soon visit more pure parts,” Van Doorn said after visiting the holy city of Medina.