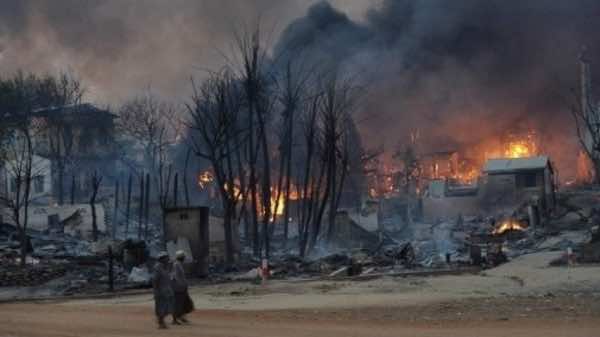 Security forces were complicit in disarming Rohingya Muslims of makeshift weapons and standing by, or even joining in, as Rakhine Buddhist mobs killed men, women and children in June and October 2012, New York-based HRW said.

“While the state security forces in some instances intervened to prevent violence and protect fleeing Muslims, more frequently they stood aside during attacks or directly supported the assailants, committing killings and other abuses,” the report said of the unrest, in which at least 110 people died.

The failure to investigate properly or punish state officials had emboldened those behind campaigns against Muslims elsewhere, said Phil Robertson, deputy Asia director at HRW, referring to violence in central Myanmar that killed more than 43 people in March and displaced at least 12,000.

“People are allowed to incite and instigate in a coordinated campaign – this is the lesson taken in by others,” Robertson told Reuters. “What happened in Arakan (Rakhine) has helped spark radical anti-Muslim activity.”

Myanmar government officials could not be reached for comment on the report.

Human rights abuses still take place in fast-changing Myanmar despite widespread political, social and economic reforms by a quasi-civilian government that took power in March 2011 and convinced the West to suspend most sanctions to allow aid and investment into one of Asia’s poorest countries.