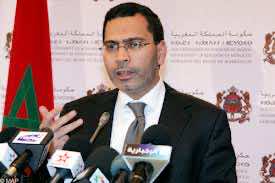 The United Kingdom reiterated on Monday commitment to reinforcing strategic partnership with Morocco and praised headway achieved by Morocco in democratic reforms and human rights promotion.

The British official said he had “excellent” talks with the communication minister, stressing that the two countries are linked by strong cooperation ties that are bound to be further consolidated through strategic partnership.

El Khalfi said he is visiting London to keep British officials informed about reforms made by Morocco, particularly as concerns enlarging freedoms, promoting human rights and social and economic rights.

The visit is also an opportunity to deepen dialogue with organizations advocating press freedom and human rights.

El Khalfi will be meeting parliamentary under-secretary for culture, communications and creative industries, Ed Vaizey, and with executives from the British commission in charge of press complains and Amnesty International.

He will also give a conference at the British parliament at the initiative of the Conservative Middle-East Council.