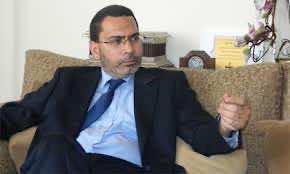 Morocco’s communication minister and government spokesman, Mustapha El Khalfi, presented on Monday at the British parliament political and economic progress achieved in Morocco, spearheaded by King Mohammed VI Mohammed VI, stressing that this progress makes of Morocco an exception in a troubled region.

El Khalfi, who was speaking at a round table at the Westminster palace in the presence of several MPS, researchers and journalists, pointed out that Morocco’s success in ushering democratic reforms while maintaining stability was internationally-acclaimed, insisting that monarchy is the warrant of the state endurance.

Morocco has emerged as a unique and successful model in a troubled region, went on the minister, before underlining the diversity of the Kingdom’s political, social, cultural and linguistic diversity as well as efforts to promote civil society.
He further noted that the speech delivered by King Mohammed VI in March 2011 has set a roadmap for a successful democratic process, recalling that the process started with the reform of the family law that enhanced women’s rights and the creation of the Justice and reconciliation commission to shelve past human rights abuses.

The official cited the recognition of the Amazigh culture and language as a component of the Moroccan identity, in addition to the National human development initiative as a tool to achieve economic, social and human development and reduce social gaps.

The new government that emerged from the 2011 legislative elections is endeavoring to carry on political and economic development efforts, El Khalfi went on evoking justice reform and the regionalization and decentralization process.
Owing to these efforts, more and more foreign direct investments are attracted to Morocco, as FDI’s grew by 19.4 pc in the first 9 months of 2012 compared to the same period of 2011.

At the international level, the minister further highlighted the strategic dialogue launched by Morocco with the USA, France, Spain and the United Kingdom, explaining that this is the best way to preserve stability in the region and that latest development in the Sahel region reflect the importance of challenges of extremism upsurge and the threat it represents for stability in the whole region.

Of the Sahara issue, El Khalfi surveyed the historical development of this issue, with a special focus on the initiative presented by Morocco in 2007 to grant large autonomy to its southern provinces as a means to settled once and for all this artificial conflict, recalling that superpowers and the UN security council welcomed the proposal as credible, serious and realistic.

He also denounced the exploitation of human rights by the other party and its refusal to start earnest discussions over a conflict that foils all regional integration attempts.