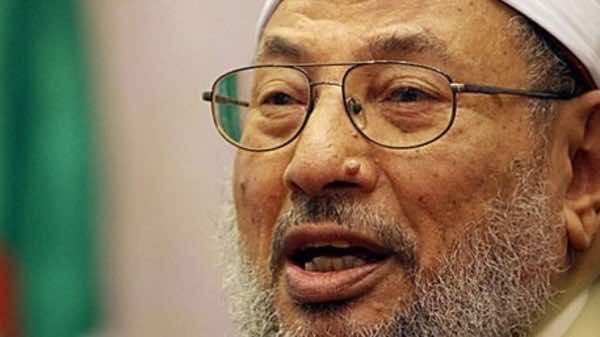 “I decided not to participate so I wouldn’t sit at the same platform alongside Jews who still violate Palestine and destroy mosques and as long as the Palestinian issue has not been resolved,” Qaradawi told the Al-Arab daily of Qatar.

“There is no more injustice than what the Jews have caused to our people in Palestine.”

The International Union of Muslim Scholars which he heads is, however, represented at the conference which brings together 500 personalities from 75 countries representing the three monotheistic religions.

Egypt-born Qaradawi is a controversial religious figure in the West and has millions of supporters – mainly from the Islamist Muslim Brotherhood.

He hosts a popular show on Al-Jazeera satellite television and has backed the Arab Spring uprisings in Tunisia, Egypt, Libya, and Syria.

Britain denied entry for Qaradawi in 2008 saying the UK does not tolerate those who support acts of terrorism. During a previous visit to Britain in 2004, he justified attacks on Israelis as “martyrdom in the name of God.”

He was also banned from entering France in the wake of the 2012 Toulouse attacks, when French gunman Mohamed Merah killed seven people.

Qaradawi reportedly holds a diplomatic passport and does not require a visa to enter France, but then French president Nicolas Sarkozy reportedly told Qatar’s emir that Qaradawi was undesirable in France.

Qaradawi is often viewed by his supporters as representing the moderate voice of Islam. He was born 1926 and educated at Cairo-based al-Azhar University, a world’s leading Islamic educational institution.

The Sheikh was imprisoned in the 1950s by nationalist president Gamal Abdel Nasser. In 1961 he left for Qatar. In 2011, he returned to Egypt to speak in Tahrir in the wake of the Egyptian revolution.