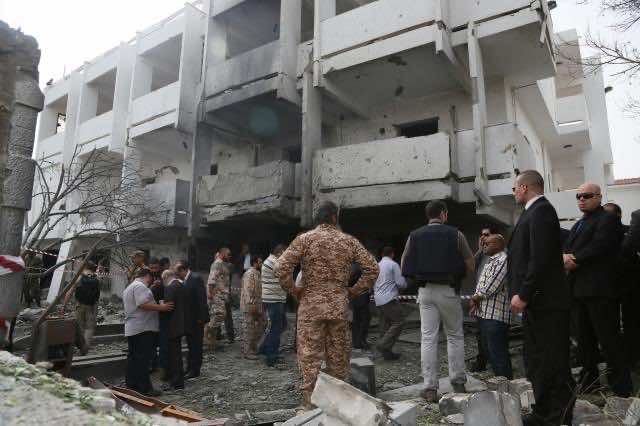 The United States on Tuesday called on Libya to punish the assailants behind a car bombing of the French embassy in Tripoli and said it stood ready to assist Paris on the case if needed.

State Department spokesman Patrick Ventrell said that the United States condemned the attack, which caused extensive damage to the French mission, and extended sympathies to the two guards who were injured.

“France is one of our closest allies in promoting peace and development around the world. Such violence is a direct attack on all Libyans, who fought a revolution in order to enjoy a democratic future with security and prosperity,” Ventrell told reporters.

“We look to the Libyan government to continue its efforts to strengthen security across Libya and to bring the perpetrators of this crime to justice,” he said.

Ventrell said that US authorities “of course stand ready to assist our French ally” but that he had not heard of any request from Paris.

It was the first attack on a foreign mission in Libya since Al-Qaeda-linked militants stormed the US consulate in the eastern city of Benghazi in September, killing four Americans including Ambassador Chris Stevens.

Ventrell said that the US embassy in Tripoli remained in operation after the attack on the French mission, although US diplomats at the post are already under restrictions due to security concerns.

France, Britain and the United States carried out a military campaign in 2011 that helped rebels topple long-ruling dictator Moamer Kadhafi. The North African country has been wracked by insecurity ever since.