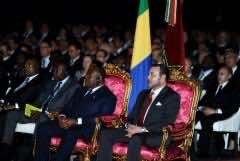 During the ceremony, minister of agriculture and maritime fisheries, Aziz Akhannouch, made an address before the King in which he presented the results of the Green Plan at end 2012, and prospects and future development paths for the Moroccan agriculture.

The minister pointed out that the agricultural gross domestic product rose over the period 2008-2012 by 32 pc compared to the reference period (2005-2007).

Since its launch in 2008, the plan has increased the cultivated area by 11 pc (750,000 ha) and contributed to improving the yield of the main production sectors, with a rate ranging between 6 pc for citrus fruits and 65 pc for cereals, the minister said.

Akhannouch noted a quasi-stability in the price index of agricultural food products that did not exceed 13 pc as against 33 pc internationally.

The plan, which set the promotion of the competitiveness of the agricultural sector as a priority, has also enabled the recovery of investment in this sector, which reached 53 billion dirhams during the last five years.

Fruit production reached during the current year 12 million tonnes, up 163 pc. As to the olive production, it rose 84 pc, standing at 1.4 million tonnes, with the total area planted with olive trees expected to reach one million hectares by the end of 2013, he said.

The opening ceremony of the conference, held under the theme “Agribusiness and food security: better utilization of agricultural potential,” was also marked by a presentation by Gabonese President Ali Bongo Ondimba on agriculture and forest areas development plan “Green Gabon”.

In the agricultural sector, said Bongo, Gabon, which has land suitable for cultivation, is however facing difficulties relating in particular to the weakness of the agricultural population, aggravated by intensive rural exodus, lack of agricultural executives, and under valued hydro-agricultural infrastructure and logistics.

The goals of the “very ambitious” plan cannot be achieved without the support of the private sector, the Gabonese president said, pointing out that the global outlook points to a tendency to growing needs over the next 20 years.

“It is therefore incumbent upon us to work together to build solid, sustainable and dynamic economies that will benefit all the parties,” he said.

Bongo said he was confident that after the conference, “Gabon and Morocco will lay the groundwork for new, more extensive ties consistent with the model of collaboration and exemplary South-South integration through fruitful and multifaceted partnerships in all sectors.”

Thereafter, King Mohammed VI, accompanied by the Gabonese President, presided over the signing of four agreements between the government and the sector professionals aimed at developing the Moroccan agriculture and enhancing its competitiveness.

At the end of the ceremony, the minister of agriculture and maritime fisheries presented to the King a document on the results of the Green Plan.

More than 1,000 participants are taking part in the Conference, organized ahead of the 8th International Agricultural Exhibition (April 24-28).