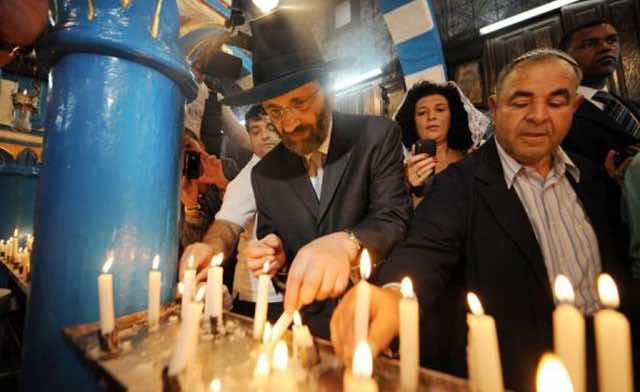 Organisers of a Jewish pilgrimage to Africa’s oldest synagogue, on the Tunisian island of Djerba, are hoping for a revival
this year after an Al-Qaeda attack in 2002 and post-revolution unrest caused a slump in attendance.

Some 450 foreign pilgrims as well as Tunisian Jews are expected for the event that runs from Friday to Sunday on the Mediterranean resort island, a pale shadow of the crowds that once thronged to the 2,500-year-old place of worship.

A suicide attack at Ghriba in April 2002 that was claimed by Al-Qaeda killed 21 people and triggered a dramatic decline in turnout. While numbers have recovered slightly, they remain far below the 8,000 that came before the attack.

The event was then cancelled in 2011, with the country on edge after an uprising toppled veteran strongman Zine El Abidine Ben Ali. The rise of Muslim extremists in Tunisia since then has only fuelled the fears of potential pilgrims.

Perez Trabelsi, one of the organisers, said he understood why people were reluctant to come, given the instability that has plagued Tunisia since the revolution, but remained defiantly optimistic.

“There could be 1,000 people, but that would be fine. Next year there will be 2,000 and then 3,000. Every year there will be more,” he said, while voicing confidence that Tunisia’s Islamist-led government would provide adequate security.

“There will be a lot of police, and strong efforts are being made to reinforce security,” he said, adding that there were no incidents last year.

A security source, cited by the official TAP news agency, said reinforcements were first deployed on Saturday and that the security forces had been conducting special anti-crime operations in the region since February.

“The reinforcements will be deployed, in particular, in the tourist areas and at the island’s entrance, as well as in the neighbourhoods of the Tunisian Jewish residents in Djerba… and at the Ghriba synagogue,” the source said.

Tunisia’s state of emergency, which has been in force since the revolution, has given extra powers to the army and police to help them contain the attacks by Islamist militants that have rocked the country.

But while the organisers express confidence in the security arrangements at Djerba, other groups have raised concerns over an apparent rise in anti-Semitic language, accusing the authorities of not taking the problem seriously.

At the end of March, a Tunisian minorities support group accused the judiciary of failing to bring prosecutions for inciting hatred, a crime punishable by three years in jail.

The group pointed to the case of Ahmed S’hili, an imam from a suburb of the capital who has still not faced investigation after calling on God to eradicate the Jews in a sermon late last year.

Beginning 33 days after the start of the Jewish Passover festival, the Ghriba pilgrimage involves two processions to the synagogue, which according to legend was founded in 586 BC by Jews fleeing the destruction of the Temple of Solomon in Jerusalem.

The first procession will take place on Friday and another on Sunday.

The organisers would not give details on the nationalities of the expected pilgrims, except for the Tunisian Jews, who number around 1,500, compared with an estimated 100,000 living in the north African country when it gained independence in 1956.