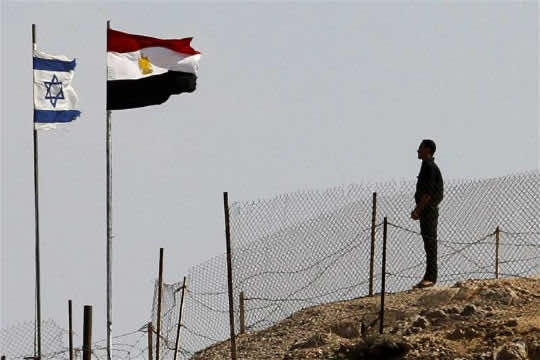 An Israeli Bedouin who has been jailed in Egypt for more than 12 years on charges of spying has begun an open-ended
hunger strike, he said in a handwritten letter in Arabic seen by AFP.

Ouda Tarabin’s letter, passed on to the Israeli embassy in Cairo, was addressed to Ambassador Yaakov Amitai.

“I ask that his excellency, as an ambassador of the State of Israel … inform Israeli Prime Minister Benjamin Netanyahu and Egyptian President Mohamed Morsi about my hunger strike, which I began on April 23, 2013,” he wrote.

He slammed the Israeli and Egyptian governments for what he said was their inaction on his case.

“Both Israel and Egypt have abandoned and violated their pledges and commitments” to upholding human rights, Tarabin said.

In particular, “Israel has abandoned its legal and moral commitment to protecting my rights and freedoms and to working seriously towards my release,” he said, adding that the Jewish state had “full knowledge of my innocence.”

Tarabin, a resident of the southern Israeli city of Rahat, used to travel regularly to Egypt to visit his two sisters in the port city of El-Arish.

But during a trip in 2000 he was arrested and informed that he had been tried in absentia on charges of spying for the Jewish state and was sentenced to 15 years behind bars.

Tarabin, who was 19 when he was arrested, has always insisted he was innocent.

Israel has long called for his release, and on several occasions it has been raised in the context of a possible prisoner swap.

In October 2011, Israel freed 25 Egyptians in exchange for the release of a US-Israeli called Ilan Grapel, who had been held in Cairo for four months on spying charges.

At the time, Netanyahu ordered officials “to do their utmost” in order to secure the release of Tarabin.

The Israeli foreign ministry refused to comment on the issue.

In his letter, Tarabin added that the fact that he was tried in absentia denied him “the legal opportunity and right I am entitled to, under the UN Human Rights Charter and the International Covenant on Civil and Political Rights, to defend myself in light of the allegations against me, to appeal it and to hold a lawful and just trial.”

“He is being held in inhuman conditions. There is no running water in his cell,” his lawyer Yitzhak Meltzer told AFP, saying he was completely isolated.

Around half of those in the south live in unrecognised villages not connected to the electricity grid or the water network and are locked in a major struggle with the state over land ownership.