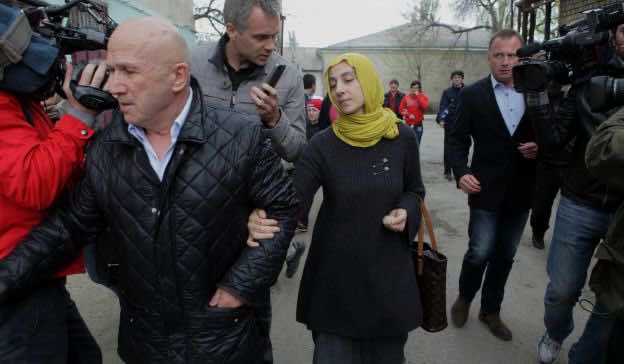 A delegation from the US embassy in Moscow interviewed the parents of the Boston marathon bombing suspects in the Russian North Caucasus region of Dagestan, but were told the two brothers had not contacted local Islamist groups, officials said Wednesday.

The parents of Tamerlan and Dzhokhar Tsarnaev are currently living in Dagestan, an overwhelmingly Muslim region on the Caspian Sea where the family briefly lived before leaving for the United States.

“The FBI is receiving cooperation from the Russian government in its investigation of the Boston marathon bombing,” a US embassy official, who asked not to be named, told AFP.

“A group from the US Embassy in Moscow travelled to Dagestan yesterday (Tuesday) as part of this cooperation with the Russian government to interview the parents.”

The official declined to say whether the delegation was still in Dagestan and if the interviews had already taken place.

However a Dagestan security source told an AFP correspondent in its main city Makhachkala that interviews with both parents took place overnight and involved representatives of the FBI.

“The parents were taken home but in the morning the mother came back for more questioning,” the source said, saying the interviews took place at the local headquarters of Russia’s Federal Security Service (FSB).

The Dagestan security source also said the parents were asked by the US officials about Tamerlan’s visit to Dagestan. “The parents replied that he did not make contact with radical Islamists.”

The two brothers, who had been living in the United States for over a decade, are accused of the twin marathon bombing on April 15, which killed three people and wounded more than 260 others.

Tamerlan, 26, was killed in a shootout with US police while Dzhokhar, 19, was gravely wounded during his capture last week. He remains hospitalised and has been read the charges of using and conspiring to use a weapon of mass destruction.

The brothers’ father Anzor, an ethnic Chechen born in Kyrgyzstan, has repeatedly said in media interviews that his sons were innocent and could not have carried out the bombings. Their mother Zubeidat, an ethnic Avar, hails from Dagestan itself.

The trip by the US delegation to Dagestan comes amid mounting questions in the United States about whether the US authorities missed crucial signals that should have raised suspicion about the two brothers before the bombings.

Particular interest has surrounded a trip of around six months made by Tamerlan in 2012 to Dagestan and Chechnya.

The avowed aim of the trip was to obtain a new Russian passport which in the end he never picked up and US investigators want to find out if the real purpose was to make contact with Muslim extremists.

Dagestan’s interior minister Abdurashid Magomedov meanwhile rubbished any suggestion that Tamerlan had been “infected” with radical Islam during his stay in the Northern Caucasus.

“According to interior ministry information, Tamerlan Tsarnaev did not have contact with the (Islamist) underground during his visit,” said Magomedov, quoted by his spokesperson.

Dagestan, one of the world’s most ethnically diverse regions made up of hundreds of different groups and languages, has in recent years become the most violent region in the Northern Caucasus with almost daily attacks blamed on Islamist insurgents.

The insurgency has been led by the extremist Caucasus Emirate group of wanted militant Doku Umarov but its Dagestan offshoot at the weekend denied any link to the Boston bombings.

The US trip to Dagestan also comes after President Barack Obama and Russian counterpart Vladimir Putin vowed to step up cooperation between their special services in the wake of the Boston bombings.