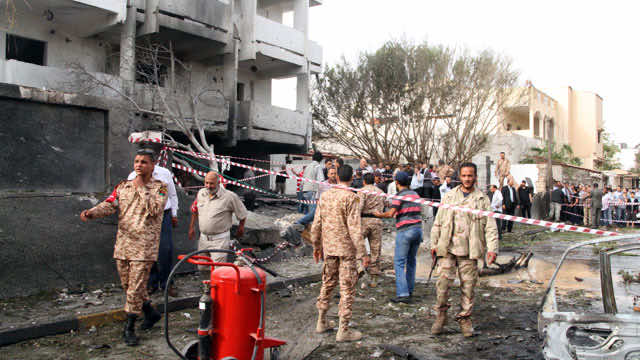 Tuesday’s bomb attack on the French embassy highlighted the security situation in Libya, with extremists and militias gaining influence as Paris’ intervention in Mali has tried to uproot radical Islam from the region.

Since the fall of the regime of Moamer Kadhafi in October 2011, extremist Islamist have steadily gained influence.

Many such groups amassed formidable stocks of weapons during the uprising against Kadhafi’s regime.

The attack on the US consulate in Benghazi last September 11 that killed ambassador Chris Stevens and three other Americans proved just how powerful some of these groups had become.

“A number of groups in the region have a strong motive to attack the French embassy in Tripoli, not least Al-Qaeda in the Islamic Maghreb (AQIM) and other related militant Islamist groups such as the Movement for Oneness and Jihad in West Africa (MUJAO),” said Anthony Skinner, MENA director for risk analysts Maplecroft.

Armed jihadist groups such as MUJAO and AQIM had threatened to hit back at France’s interests in the region after they were targeted by French troops in Mali.

“It is notable, and possibly not a coincidence, that the attack came a day after the French parliament voted to extend France’s military deployment in Mali,” he added

But for Fradj Naji, a Libyan analyst and head of the African Studies Centre, “it would be stupid just to focus on following the trail of jihadist groups like Al-Qaeda.”

Naji said that while some Islamists were sympathetic to jihadists in northern Mali, there was also a feeling of gratitude towards France, whose forces took part in the NATO campaign against Kadhafi.

But he refused to rule out that sympathisers of the ousted regime may have carried out the attack. “How do you explain that so far, the attacks have only targeted countries that took part in the international coalition’s military operations?”

Some analysts have suggested that extremist groups in Libya have become more important than those elsewhere in the region, such as AQIM, and can act independently thanks to the weapons they seized from former regime military bases.

Libyan links to other radical North African groups came to the fore after the “Signatories in Blood” group, lead by one of AQIM’s founders, Mokhtar Belmokhtar, attacked an oil site in southern Algeria in January.

At least 38 hostages — 37 foreigners and one Algerian — and 29 militants were killed in the days-long desert stand-off.

The attack on the French embassy came at a delicate time for the Libyan government. Tripoli has launched a crackdown on ex-rebel militia groups, some of which are motivated by financial reasons and control large swathes of the country.

These militias, mostly former rebels who battled Kadhafi’s forces, are refusing to hand over their weapons and have clashed with the authorities when their interests were under threat in the past.

Yet the head of security in Tripoli, Mahmud al-Sherif, is reluctant to start attributing responsibility just yet.

“We are facing several enemies and threats. At the moment, it is too soon to try to point the finger at any one group,” he told AFP.