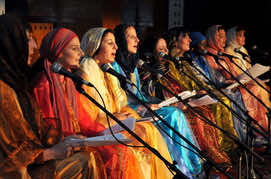 Morocco on Wednesday (April 17th) wrapped up the 7th Fes Festival of Sufi Culture, an event dedicated to the promotion of intercultural dialogue.

The five-day event drew musicians, dancers and scholars from around the world, as well as many young people attracted by the message of Sufi Islam.

“The festival is open to all kinds of expression of Sufi cultures,” event director Faouzi Skalli said.

The goal of the event was to convey a positive image of Islam “through the universal language of openness and peace advocated by its spiritual voice, Sufism”, he added.

Another aim was to consolidate Morocco’s position in intercultural dialogue by building a bridge between East and West.

Meddeb expressed concern at the way Islam was being used by certain parties and expressed regret over the destruction of Sufi shrines by extremists in Tunisia.

The return to the spirit of Sufism “is unquestionably a healthy path because Sufism enables us to create open structures and a proper strategy for otherness”, he said.

“It is important to highlight the values of Sufism, which are based on the importance of dialogue, listening to others and seeking common ground and a language that can be understood by all,” researcher Said Bennani said.

Festival participants noted that Sufi Islam can combat backward ideology, especially at a time of growing fundamentalism and radicalism.

Morocco has always paid particular attention to Sufism through the presence of several brotherhoods throughout the country, sociologist Samira Kassimi told Magharebia.

“These brotherhoods play a very important role in the spread of knowledge, best practice and the principles of tolerance, peace and brotherhood. At the moment, Sufism is confronted by the heresy of religious fundamentalism and represents the voice of the middle course,” she said.

Many people emphasised the need to get young people interested in the culture in order to help them find the path to serenity while remaining open to different cultures, Kassimi said.