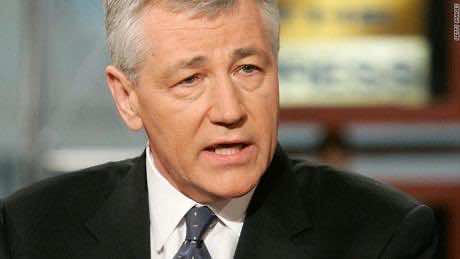 U.S. Defense Secretary Chuck Hagel urged caution Wednesday over an Israeli claim Syria’s regime used chemical weapons, saying it was “serious business” and any evidence had to be weighed carefully.

Warning against a possible rush to judgement, Hagel indicated he had been caught off guard by allegations from an Israeli general this week that Syria had fired chemical agents against rebels in recent months.

“When I was in Israel they did not give me that assessment. I guess it wasn’t complete,” Hagel told reporters in Cairo on a tour of the Middle East that included a three-day visit to Israel.

The United States has warned any use or transfer of chemical weapons would cross a “red line” and possibly trigger military action.

Britain and France also suspect Syria has used chemical weapons but Hagel said U.S. intelligence agencies were still evaluating information and were not yet convinced.

“Suspicions are one thing, evidence is another,” he said.

The Pentagon chief added that “this is serious business and you want to be as sure as you can be on these kind of things”.

Asked if U.S. credibility could be at risk as it has repeatedly referred to a “red line,” Hagel said: “I don’t think there’s any danger”.

The United States cooperates with other spy services but ultimately had to rely “on its own intelligence,” he said before departing for Abu Dhabi.

While Hagel was wrapping up his visit to Israel on Tuesday morning, Israeli Brigadier General Itai Brun, head of the research and analysis division of military intelligence, grabbed headlines when he alleged Syrian President Bashar Assad’s regime had used chemical agents — mostly likely sarin gas — more than once.

“To the best of our professional understanding, the (Assad) regime has made use of deadly chemical weapons against the rebels in a number of incidents in the last few months,” Brun told a security conference in Tel Aviv.