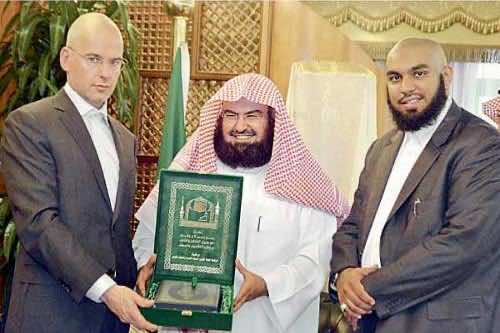 After embracing Islam, Arnoud van Doorn, a former member of the Dutch right-wing Freedom Party, plans to produce a film in defense of Islam and prophet Mohamed, the Saudi Gazette reported on Tuesday.

In repentance for his part in the production of the Dutch anti-prophet film, Arnoud declared his determination to disseminate the values of Islam during his visit to Mecca.

“I will spare no efforts to protect the rights of Muslims in all European countries as well as to serve Islam and its followers throughout the world. I will try my best to repair the damage that I caused to Islam and its Prophet (peace be upon him) through the film ‘Fitna’,” he was quoted by the Saudi newspaper as saying.

“I will use all my experience in producing an alternative film, which will speak about the true image of Islam and all aspects of the personality of the Prophet (pbuh) as well as his great qualities,” he added.

During a meeting with distinguished Muslim clerics, Arnoud announced that the film he is currently working on will feature the good manners and admirable attributes of prophet Mohamed.

“Arnoud converting to Islam is a great honour for us Muslims,” Sheikh Abderhman Soudaiss was quoted as saying.

Along with Geert Wilders, Van Doorn had produced the controversial short film Fitna, which depicts Islam as an inherently violent religion.