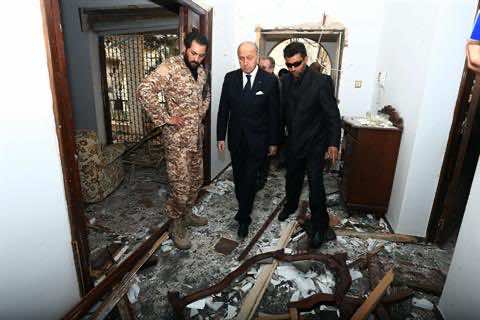 Security breaches preceded the bombing of the French embassy in Tripoli this week, the president of Libya’s national
assembly said, while adding that investigations into the attack were progressing.

“It is clear that there were security breaches. No one can deny it,” Mohammed Megaryef said on a visit to the site of the Tuesday bombing, which wounded two French guards.

“All those charged with security (in Libya) bear part of the responsiblity,” he told AFP, with elaborating.

Megaryef also said there had been progress in the investigation into the attack, which seriously damaged the embassy, but declined to give any details.

Libyan media have reported that security forces arrested two to four people in connection with the attack, but the interior and defence ministries told AFP security forces had not informed them of any arrests.

Meanwhile, the government issued a statement on Thursday saying that only the prime minister, justice, foreign affairs and defence ministers were authorised to make statements about the incident, without giving further details.