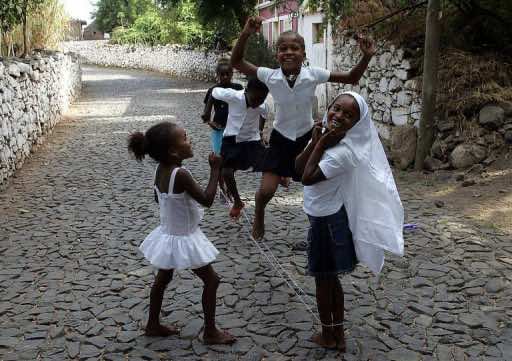 A handful of descendants of Cape Verde’s small but influential Jewish community are traveling to the West African archipelago to honor the memory of their ancestors and their unique heritage.

Next Thursday, they will re-dedicate the long-neglected Jewish burial plot within the Varzea municipal cemetery in the islands’ capital Praia that has been restored with financial help from Morocco’s King Mohammed VI.

“Knowing my past is very important for me,” John Wahnon, 71, whose great-grandfather and great-great-grandfather immigrated to Cape Verde from Gibraltar in the 19th century, told AFP on Thursday.

“It gives me a sense of continuity,” said the Washington-area resident, who immigrated to the United States — home to nearly half a million people of Cape Verdean descent — as a young adult.

Some 350 miles (570 kilometers) off the African mainland, Cape Verde’s 10 islands — a maritime waypoint between Europe and South America — were uninhabited when they were colonized by Portugal in the 15th century.

Several hundred Jews from Morocco arrived in the 19th century, starting businesses and taking up government posts while intermarrying with the predominantly Roman Catholic majority.

“For Cape Verde, the Jewish community was maybe few in number, but they were influential in terms of economic development,” said Carol Castiel, a Washington journalist who heads the non-profit Cape Verde Jewish Heritage Project.

“These were families that had an inordinate impact on Cape Verde’s development — whether it’s the Wahnons, the Benoliels, the Benros, the Cohens — and it’s an unwritten chapter,” she told AFP.

Wahnon’s own ancestors settled in Mindelo, a bustling 19th century port of call for transatlantic shipping that, more recently, is best-known for internationally celebrated Cape Verdean musicians such as the late Cesaria Evora.

Without giving figures, Castiel said Morocco’s monarch had been “a major benefactor” to a fund-raising drive to restore the Jewish burial plot in Praia, one of a number scattered around the islands.

He was motivated by a wider interest in preserving his kingdom’s Sephardic Jewish heritage, said Castiel, who personally discovered Cape Verde in the 1980s, when she oversaw US scholarship programs for Portuguese-speakers.

“Think about it: here is a benevolent Muslim monarch contributing to honoring Jewish heritage in a predominantly Catholic country,” she said.

Joining the descendants from Europe and the United States for the re-dedication ceremony will be Lisbon’s chief rabbi Eliezer Shai di Martino and Cape Verdean officials.

Going forward, Castiel said the Cape Verde Jewish Heritage Project hopes to restore other Jewish burial plots — two on Santo Antao, across a narrowstrait from Mindelo, and one on Boa Vista — and pursue historical research.